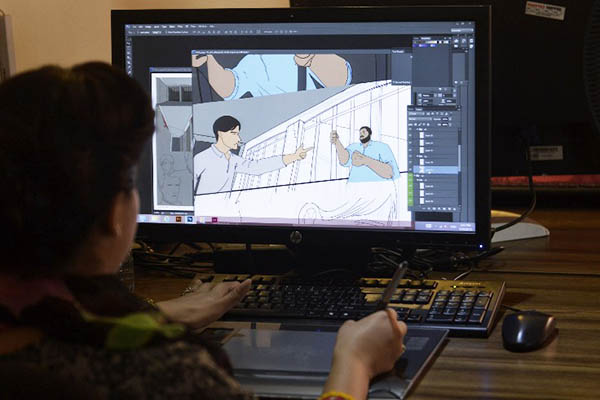 Comic book aims to counter jihadist doctrine and steer children away from extremism.

The pair had already been working on a series to raise awareness about the corruption that plagues the economically underperforming Muslim giant of 200 million people. But they quickly decided to shift their focus to violent extremism—and felt holding candle-light vigils was not the best way to effect change.

Hasnain, a British-educated computer graphics specialist, founded his own company Creative Frontiers in 2013, today employing 20 people, including young male and female artists, programmers and writers, in a hip Silicon Valley-style office in Lahore. He explained: “It was a huge watershed moment for us. I got together with Gauhar and I said ‘We really have to do something about this.’ We used to stand over there [at vigils] with a candle… but we wanted to do something more.”

The result was Paasban—or Guardian—a three-part series featuring a group of close friends at college who begin to worry when one of them drops out to join a religious student group that is ostensibly working for charitable causes. Some in the group however, suspect it may have darker aims. At least 15,000 of the books are set to be distributed for free from June 1 at schools in Lahore, Multan and Lodhran while some copies will be made available in book stores. The comic will also be distributed on a tailor-made app the group has developed for Apple and Android smartphones.

For English-language script writer Aftab, the pathway from disillusionment to signing up to carry a gun and fight the so-called enemies of Islam was not just something he had read about in the news—it was a choice he had almost made as a child. A product of Aitchison College, Pakistan’s elite equivalent to Britain’s Eton, Aftab came under the influence of a charismatic teacher who convinced him at 13 to leave behind his school and family to fight jihad against the Indian army in the disputed Himalayan region of Kashmir.

Eventually pulled back by a last-minute family intervention, he came to identify the methods that radicals use to attract young people to violent jihad. “De-emphasizing the virtues and values of your traditional faith, moving you towards the more minimalistic standpoint when it comes to religion, demonizing various factors or forces that you feel to be threatening Islam, then [finally] glorifying the aspect of martyrdom,” he said.

By creating a storyline that features a protagonist going through these experiences, said Aftab, young people who see the same thing going on in their lives or those of their friends will be better equipped to identify and avoid the same fate.

The Urdu translation was written by renowned scriptwriter Amjad Islam Amjad, responsible for some of Pakistan’s most popular TV shows, in an effort to ensure an audience that is as wide as possible in a country where English remains a tool of the educated elite.

While comics in the U.S. tradition often feature heroes with super-powers such as DC Comics’ Superman or Marvel Comics’ Avengers, Paasban’s creators decided to concentrate on creating ordinary heroes they felt the Pakistani audience would relate better to.

The art is inspired by Alphonse Mucha and Pakistani artist Abdur Rahman Chughtai, though the action is more in line with Western comics and Japanese manga, according to creative director and co-creator Yahya Ehsan. But what the three hope will eventually land them a sustainable revenue stream beyond the donor-funding they currently receive is a digital app they have developed that they say is the best of its kind in the world for bringing graphic novels to life on smartphones.

The app is optimized to work on the low-end smartphones available from about $70 that have flooded the Pakistani market since the advent of 3G data connections last year, with some estimates placing smartphone penetration at 20 percent of the country’s estimated 80 million mobile users. Users can swipe from panel to panel, with simple animations depicting new characters entering a scene, all set to a brooding background soundtrack.

Aftab, the writer, said he hoped other writers and artists would follow their lead and use the app to encourage a debate on what he calls the “real” Islam of peace which he discovered once out of the clutches of his former teacher. “We want to promote the idea that you don’t have to be secular to be non violent… What you need to be is a Muslim who rejects the violent extremist form certain groups have given to our faith,” he said.