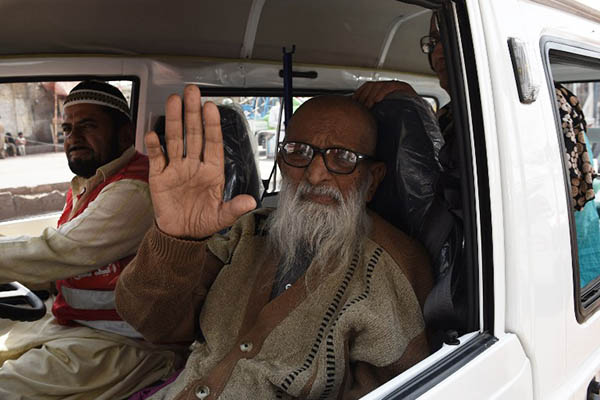 Abdul Sattar Edhi has been nominated once again for the Nobel Peace Prize.

He created a charitable empire out of nothing, masterminding Pakistan’s largest welfare organization. Today Abdul Sattar Edhi is revered by many as a national hero. Content with just two sets of clothes, he sleeps in a windowless room of white tiles adjoining the office of his charitable foundation. Sparsely equipped: it has just one bed, a sink and a hotplate.

“He never established a home for his own children,” says his wife Bilquis, who manages the foundation’s homes for women and children. What he has established is something of a safety net for Pakistan’s poor and destitute, mobilizing the nation to donate and help take action—filling a gap left by a lack of welfare state.

“Mr. Edhi sits here, waiting for your donations,” sputters the speaker of an Edhi ambulance parked in an affluent neighborhood of Karachi, the port megalopolis of glaring inequalities. Passersby deposit alms or pay their respects to the frail old man, whose white beard and worn karakul are known throughout the country and beyond.

Edhi has been nominated several times for the Nobel Peace Prize, and appears on the list again this year—put there by Malala Yousafzai, Pakistan’s teenage Nobel laureate.

Edhi, born to a family of Muslim traders in Gujarat in British India, arrived in Pakistan after its bloody creation in 1947. “He thought that this new Muslim nation would be a social welfare state,” says his son Faisal. But, when they got to Pakistan, he found “it was the exact opposite.”

The state’s failure to help his struggling family care for his mother—paralyzed and suffering from mental health issues—was his painful and decisive turning point toward philanthropy. In the sticky streets in the heart of Karachi, Edhi, full of idealism and hope, opened his first clinic in 1951.

“Social welfare was my vocation, I had to free it,” he says in his autobiography, A Mirror To The Blind.

Motivated by a spiritual quest for justice, over the years Edhi and his team have created maternity wards, morgues, orphanages, shelters, and homes for the elderly—all aimed at helping those in society who cannot help themselves.

The most prominent symbols of the foundation, its 1,500 ambulances, are deployed with unusual efficiency to the scene of terrorist attacks that tear through Pakistan with devastating regularity. But its ethos of humanitarianism transcending religious and ethnic lines while empowering the masses has made it the target of many ferocious smear campaigns. Hardliners have branded him an infidel and his work un-Islamic.

Edhi’s response has been hard work and an obstinate asceticism, a bid to leave his enemies with no ammunition. His work so conquered the esteem of Pakistan’s masses that armed groups and bandits were known to spare his ambulances.

The annual budget of Rs. 1.5 billion, mainly from donations by middle- and working-class Pakistanis, continues to grow, according to Faisal, despite criticism from fundamentalist groups eager to snatch such support for themselves.

Abandoned children and the elderly, battered women, the disabled, drug addicts; Edhi’s foundation now houses some 5,700 people in 17 shelters across the country. It employs around 3,000 people, many of whom were former residents.

The project Bilquis Edhi is most proud of is the baby cradles adoption service. In the early days of his work, as Edhi cruised the streets in his ambulance, he was made desperate by the number of infant corpses he came across, many believed abandoned.

Now the foundation has before each center a large cradle bearing the inscription: “Do not kill innocent babies, leave them in our cradle.”

The initiative has earned Edhi further attacks by Islamist extremists who accuse him of promoting extramarital sex in the conservative Muslim country. But Bilquis proudly displays photos of now-grown women who are now graduates of prestigious universities.

Several thousand children—the vast majority of them girls—left in the cradles over the last four decades have been housed by Edhi centers and adopted, she says. Without Edhi, “I would have had no life,” says Seher, 16, who grew up in the foundation’s decrepit headquarters. “Bilquis and Edhi are there for us round the clock,” smiles the girl.

She cares for younger children, including the small daughter of a thief jailed for the burglary of the foundation in 2014, a crime that caused uproar in Pakistan.

Now frail and weak, Edhi says he is unable to manage his kingdom. He appointed his son Faisal as managing trustee in early 2016. “I have done a lot of work. I am satisfied with my life,” the patriarch sighs.

“He is my hero,” says Faisal, adding that stepping into his father’s humble but mighty shoes is a “great responsibility.”

“We still have so much to do.”

I have no words to say but there is a thing to follow and that is “humanity”.

Was this article truly in favor of Great Edhi?? Did Edhi really say: “Edhi says he is unable to manage his kingdom”…..Any one who has ever met Edhi can vouch that he hates Kings……… The mere fact that Nobel Peace Committee found Obama, and Shimon Prez an Israeli leader more suitable for the Nobel Peace prize rather than humble Edhi says much about west & Nobel prize.

Well said! This article is written in very bad taste. Edgi Saab is a national treasure and hero and to say that he is ‘obstinately’ continuing to live a simple life it that he has a ‘kingdom’ is maligning him. Shame on the writer for this idiotically phrased article.

He even houses the daughter of the thief who looted the Edhi centre. This man is unreal. He absolutely deserves the Nobel Prize.
Malala’s action is appreciable as she nominated Edhi for the Nobel Prize this year.