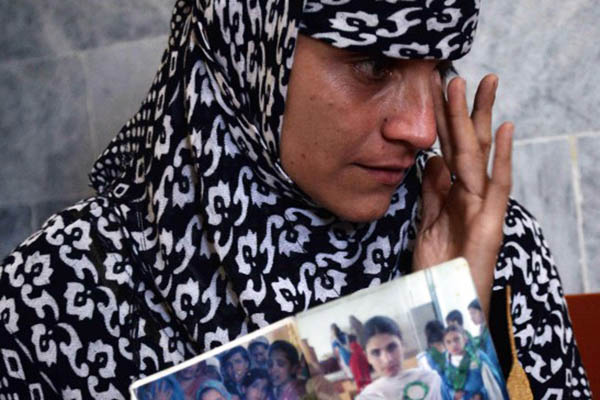 Nadia Khan cries while showing a picture of her sister, who was killed by militants. Hasham Ahmed—AFP

Despite militant threats, health workers and their security guards continue the fight against polio.

Nadia Khan treasures two photos of her sister Sumbal: one showing her bright-eyed and smiling, the other blank-faced in death after she was gunned down by militants, a “martyr” in Pakistan’s desperate fight against polio.

It was May 2013 and Sumbal and her friend Shirafat were vaccinating children against the crippling disease at a rough mud-brick house in the village of Badaber in the country’s militant-plagued northwest. Suddenly a motorcycle pulled up and the man on the back opened fire, killing Shirafat on the spot and putting 18-year-old Sumbal into a coma. For 10 days Nadia kept a bedside vigil, to no avail.

“I remember her last moment when she lost her breath in hospital, lying silently,” Nadia said ahead of Friday’s U.N. World Polio Day. “She could not talk. We wished that at least she could have had her last words with us before passing away.”

Pakistan is one of only three countries, along with Afghanistan and Nigeria, where polio is still endemic, and efforts to stamp it out have been badly affected by attacks on vaccinators like Sumbal. In the 2000s Pakistan looked on course to wipe out polio after a series of vaccination drives brought the number of cases down to just 28 in 2005, from more than 18,000 in 1993, according to UNICEF data. But from 2008 the epidemic rebounded and in 2014 hit a 15-year high, with 210 cases—80 percent of all the polio cases in the world.

The problem is concentrated in the northwest, wracked since 2007 by a homegrown Taliban insurgency, and the main city Peshawar has gained an unenviable reputation as the “world capital” of polio.

A Taliban ban on vaccination in North and South Waziristan tribal areas has left hundreds of thousands of children unprotected from the virus. Adding to the problem, many of the poorly educated population believe unfounded rumors about the vaccine containing pork or being a Western plot to sterilize Muslims. Suspicions grew after the CIA used a Pakistani doctor in 2011 to stage a hepatitis vaccination program as cover to try to find Al Qaeda chief Osama bin Laden.

Since December 2012, at least 30 polio vaccinators have been killed in Pakistan, along with nearly 30 police and security personnel guarding them.

Like Sumbal, Nadia too takes part in polio vaccination drives, but after her sister’s murder their parents begged her to quit. “I told them that I will continue my sister’s mission and will keep on working until I complete her mission,” she said.

The other victim of the attack, Shirafat Bibi, was gunned down just a few weeks before she was to be married. She had carefully saved the $6 a day she earned for giving out polio drops to pay her dowry.

That fateful May morning, after getting a call asking her to vaccinate some children near her home, the 28-year-old embraced her mother Gul Khubana, who pleaded with her to stay at home. “I told her that day not to go, even her father told her, but she said ‘It will be my last visit and then I will quit this job and will not work’,” Khubana told AFP. After her death, the family was paid compensation and Shirafat’s brother Bilal was taken on by the local authorities to do the same job.

Now it is Bilal who swallows his fear and tours poor villages on what the health teams in the area call the “jihad against polio.”

A year ago, little Shakirullah used to run happily around his neighborhood in Peshawar, but then at the start of the year the diagnosis came like a hammer blow: polio. The disease has left his legs flaccid and useless, and now, aged just two-and-a-half, he can no longer stay upright without support. “Other children can play but our poor little boy can only crawl about like a toddler,” laments his uncle Rafiullah, who fears what the future holds for his nephew.

Life in Pakistan is tough for people with disabilities, and beggars with limbs ravaged by polio limping from car to car at traffic lights are a common sight. Already this year, 350,000 young Pakistanis in the northwest have missed out on vaccination because of the perilous security situation, according to local authorities.

Even in the cities, resistance remains—last week in Peshawar 10 percent of children visited by vaccination teams refused the drops to protest this supposedly “un-Islamic” vaccine. The U.N. says Pakistan has made “notable progress” in the fight to halt polio transmission, but the struggle remains a daunting one.