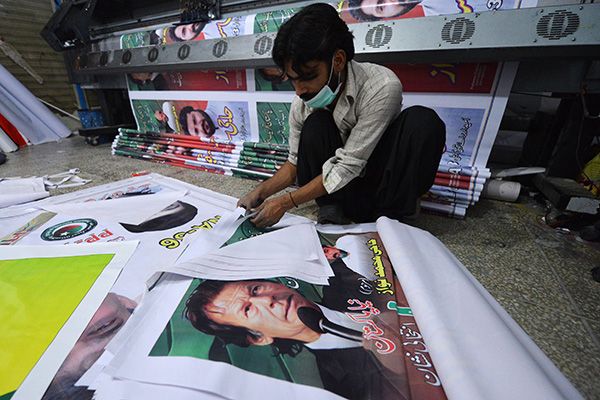 Taliban threats have forced election campaigns onto the airwaves, where political parties are spending millions of dollars in advertising.

As Taliban bombs curtail campaign rallies, Pakistan’s political parties are plugging millions of dollars into TV and print adverts to sway voters ahead of next week’s polls.

Competition is fierce but it’s a cash market and those with the biggest bucks get the most airtime ahead of the May 11 polls, say television executives on condition of anonymity.

Bursting with color, promising to fix the nation’s myriad ills, bust corruption, and bring prosperity to voters, the “paid content” ads are broadcast day and night accompanied by the upbeat, nationalist jingle of campaign songs. Although there is limited Internet access, more than 60 percent of the 180 million population have access to TV, according to the Pakistan Advertisers Society.

For medium-sized channels, an average minute of advertising costs $460-500 during 6 p.m. to midnight prime time or $250-300 earlier in the day, according to one television insider speaking on condition of anonymity. Top-rated channels charge $2,200 a minute for the 9-10 p.m. slot, a source in the advertising business said, adding that up to $300,000 is being spent daily by the three main parties on their television campaigns.

The Pakistan Peoples Party, which led the outgoing government in Islamabad, gives prominence to former prime minister Benazir Bhutto, showing footage of her 2007 assassination and anointing her son, Bilawal—still too young to contest the vote—as the country’s future.

The main opposition and frontrunner Pakistan Muslim League (Nawaz) party lionizes its leader Nawaz Sharif as a statesman and a developer, the man who knows how to fix the economy, beloved by a sea of flag-waving crowds.

Ads for cricket star Imran Khan—looking to make a breakthrough at the May 11 polls—offer voters a “New Pakistan” with his Pakistan Tehreek-e-Insaf party symbol, a cricket bat, swiping away corruption and propelling the country into the future.

With Taliban threats against the main outgoing parties, Khan and Sharif are the only party leaders to address traditional public rallies in person.

Ad men consider the elections a two-horse race in which the PPP—rudderless without Bhutto and her son too young to run for Parliament—has deliberately taken a backseat, consigned to a stint in opposition. “It’s PTI and PMLN who are the highest spenders,” said Bilal Agha, general manager for Dawn News television. He said the Pakistan Broadcasters Association raised ad prices by 25 percent and made political spots cash only, but that his channel had no favorites. “Whoever pays more, gets more,” he said.

One TV journalist said that his bosses were showing clear bias for Khan, ordering staff to cover all his public meetings and rallies, because PTI had paid so much money for ads. “Special teams and the best equipment has been deployed for this purpose,” he said on condition of anonymity. “When we cover other politicians and send reports, they are trashed,” he added.

Others say Sharif has an edge.

Recently a popular anchor of a private news channel quit her job saying she would not sell her integrity. “This elections in Pak, every1 – channel and anchor – is up for sale. I refuse to put a price tag on myself,” tweeted Sana Bucha.

The Election Commission of Pakistan has capped spending on advertising in a bid to level the playing field between rich and poorer candidates, although there is no restriction on parties.

Any of the 4,671 candidates for the National Assembly can spend up to Rs. 1.5 million ($15,000) and the 10,958 provincial assembly candidates up to Rs. 1 million ($10,000). Streets across Pakistan have been festooned with colorful flags, banners, and posters of different candidates with their leaders’ mugshots and party symbols. Supporters have plastered cars and taxis with party stickers, a sort of drive-by publicity that reminds those locked in traffic jams or weaving down Pakistan’s chaotic roads who they should be voting for.

Mohammad Faraz, manager of the Vital Lines printing house, denied print advertisements had lost ground to electronic media. “People are not watching the television or listening to radio all the time, but they see these boards all the time when they leave home,” he said. “We’ve been very busy for the last two months and most of us have not even had our weekends off. We’re working 24/7.”