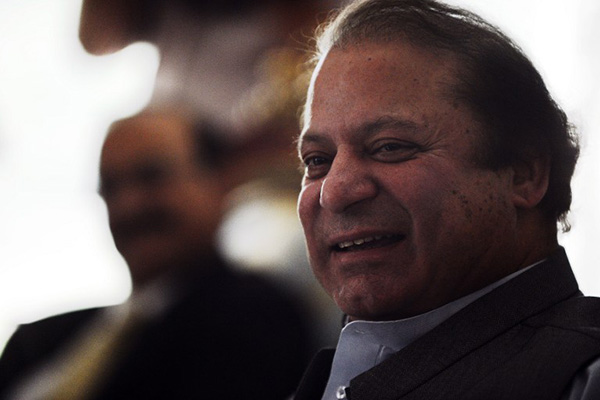 A summit of political parties to discuss national-security issues concluded in Islamabad on Sept. 9—the same day that Pakistan swore in its new president—recommending talks with all terrorist, insurgent, and criminal groups.

The so-called All Parties Conference chaired by Prime Minister Nawaz Sharif was summoned to “discuss the national-security crisis besetting our beloved Pakistan,” said the joint statement.

“We have been distressed to note that the situation has continued to deteriorate over the last several years,” reads the joint statement, “and [that] past efforts to control terrorist and extremist elements have not yielded the desired results.”

“Having been briefed about the challenges confronting our nation-state, we are fully conscious of our historic responsibility, as chosen representatives of the people, at this critical juncture in our nation’s history to devise ways and means to promote peace and prosperity and restore Pakistan’s rightful place in the comity of nations,” reads the statement. “We are also aware of the aspirations of the people of Pakistan for the … establishment of a sovereign state, secure in its boundaries, and determined to promote friendship with all and enmity toward none.”

The latest All Parties Conference unanimously resolved to:

Stand by the Army

“The sovereignty and territorial integrity of Pakistan are paramount and must be safeguarded at all costs. We reaffirm our complete trust and confidence in our valiant Armed Forces and assure them of our full solidarity and support in overcoming any challenge to our national security or threat to our national interests.”

“Thousands of precious lives of innocent men, women and children and defense and security personnel have been lost in the war, the illegal and immoral drone attacks, and the blowback from actions of NATO/ISAF forces in Afghanistan. There has also been colossal damage to social and physical infrastructure and huge consequential financial losses and adverse effects on our economy. It is extremely unfortunate and a matter of great regret that the immense sufferings and sacrifices of the people of Pakistan have not received due recognition from the international community. We pray for the [martyred] and extend our heartfelt sympathies to the bereaved families for the loss of their loved ones. We call upon the federal and provincial governments to provide all possible assistance for the rehabilitation and social reintegration of these families and other victims of terrorism, including internally displaced persons.”

“We have noted with concern the continued use of drone attacks by the United States of America in spite of clear and unambiguous protests by the democratically-elected government of Pakistan. We are unanimous that the use of drones is not only a continued violation of our territorial integrity but also detrimental to our resolve and efforts of eliminating extremism and terrorism from our country. The federal government should consider the possibility of taking the drone issue to the U.N. since drone attacks are a violation of international law. We declare that we shall ourselves determine the means and mode of fighting this war in our national interest and shall not be guided by the United States of America or any other country in this regard.”

Talk with the Taliban

“Peace, tranquility, stability and a tolerant and harmonious society are essential prerequisites for revival of the growth process for rapid socioeconomic development. In the APC in September 2011, it was declared that ‘give peace a chance’ would be the guiding central principle henceforth and that dialogue must be initiated to negotiate peace with our own people in the tribal areas. The APC in February 2013 reiterated that attaining peace through dialogue should be the first priority. The resolutions passed in the joint sittings of Parliament … contained similar recommendations, emphasizing the imperative to review our national-security strategy in the context of an independent foreign policy, with focus on peace and reconciliation, and to attach the highest priority to dialogue.”

“We have noted with grave concern the continued threat to life, property, and business in the city of Karachi and appreciate the recent initiative of the federal government to take all stakeholders into confidence and its complete support to the provincial government for restoration of peace and order. While expressing our solidarity with the people of Karachi, we urge the provincial and federal governments to make sustained and concerted efforts with complete impartiality and dedication for bringing Karachi back to its assigned glory.”

“We are cognizant of the troubled situation in the province of Balochistan and are fully aware of the concerns of our Baloch brothers and sisters. This meeting authorizes the provincial government of Balochistan and its chief minister to initiate the process of dialogue with all estranged Baloch elements inside and outside of the country with a view to bring them back into the national mainstream.”

“We appreciate the ongoing peace process in Afghanistan and firmly believe that a peaceful and stable Afghanistan is imperative to the needs of a stable and progressive Pakistan. We urge the federal government to make all efforts for bringing peace to Afghanistan by continuous and sustained engagement with the government and people of Afghanistan.”

The statement concludes by expressing “full confidence” in Sharif’s efforts to negotiate truce with the Taliban and affiliated militants, the gangs of Karachi, Baloch insurgents, and Kabul.

The parties “call upon the federal government to initiate dialogue with all stakeholders forthwith, and for this purpose authorize it to take all necessary steps as it may deem fit, including development of an appropriate mechanism and identification of interlocutors. Needless to state, the process should be as inclusive as possible, with full participation of the government of Khyber-Pakhtunkhwa and other stakeholders. Guiding principles should include respect for local customs and traditions, values and religious beliefs, and the creation of an environment that brings peace and tranquility to the region.”

The Tehreek-e-Taliban Pakistan have welcomed the joint statement. “This is the first time that the government has shown some seriousness,” said Taliban spokesman Shahidullah Shahid. “Our shura will convene in a couple of days to discuss how to tackle this offer and then forward its demands to the government.”

The ‘collective wisdom’ of the elected govt. of Pakistan can definitely break the ice of the henceforth ‘chronic’ issues of Pakistan and find out solid solutions. The more it works with sincerity and dedication the more are its chances of success. Well done all parties!