Pakistan’s Punjab province on Saturday reported the highest single-day jump in recoveries of any province—8,014—reducing the country’s active cases by 3,425 despite a record-setting 6,472 new infections raising overall confirmed cases to 132,405.

The numbers from Punjab, while encouraging, also raise questions over a clear discrepancy between the total tests conducted and the overall recoveries and new infections. Per WHO, patients are declared as recovered once they test negative twice consecutively. According to Punjab, it conducted 10,226 tests while it’s total recoveries and new infections equal 10,719. This leaves 493 recoveries that have likely not been retested and been declared disease-free after posting at least three symptom-less days following 11 days since testing positive.

In the 24 hours preceding 8:30 a.m., Saturday, the country recorded 88 deaths, increasing total deaths to 2,551. In the same time, 9,809 patients tested negative, raising recoveries to 50,056. There are currently 79,798 active cases of the coronavirus in the country, with the National Command and Operation Center reporting 2,337 of them are in critical condition.

The government, in line with Prime Minister Imran Khan’s directives to strictly enforce standard operating procedures (SOPs) on Friday announced it had sealed thousands of shops, transport vehicles and industries that had been violating preventative measures to curb the spread of the coronavirus.

The provincial government on Friday noted that capital Lahore alone now had half the total COVID-19 patients in Punjab, with officials claiming this was mainly due to non-compliance with SOPs by the public.

On Saturday, authorities reported 48 new deaths due to COVID-19, raising total fatalities to 938. The province also reported 2,705 new infections, raising confirmed cases to 50,087, against 17,560 recoveries. There are now 31,589 active cases of the virus in Punjab province.

Chief Minister Murad Ali Shah on Friday announced the disbursement of 500 oxygenated beds—provided by the National Disaster Management Authority—to six hospitals in Karachi to help cope with the rising burden of coronavirus cases. Similar to Punjab, he said provincial capital Karachi was reporting the bulk of new infections, owing this largely to the dense urban environment.

Adviser to the C.M. on Information Ajmal Wazir on Friday said the province was increasing the capacity of hospitals to cope with the rising infections of COVID-19, adding that high dependency units had also been established at Charsadda Headquarters and Women and Children Hospital. He also said that authorities had started taking strict action against all SOP violators.

The province reported 10 new deaths on Saturday morning, raising its death toll to 642. In the past 24 hours, its recoveries rose by 165 to 4,072, while its confirmed cases have increased by 628 to 16,415. There are currently 11,701 active cases of coronavirus in the province. 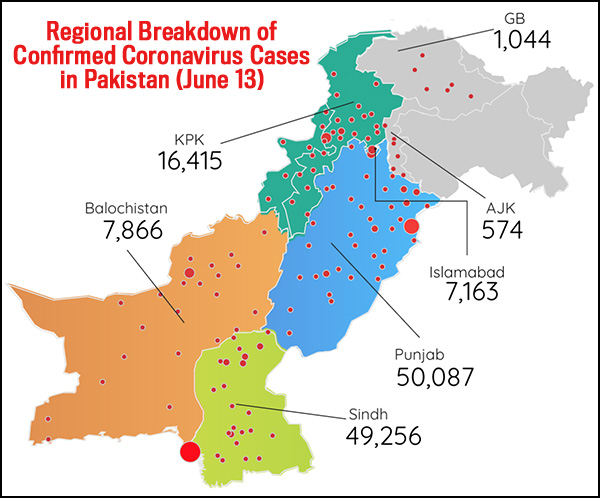 Provincial spokesman Liaquat Shahwani on Friday confirmed that 173 doctors of the province had tested positive for COVID-19 thus far, adding that 2 of them had died. There are currently 2,136 beds dedicated for coronavirus patients in the province.

Confirmed cases of the novel coronavirus in the province rose by 193 to 7,866, with 5 new deaths increasing fatalities to 80. Overall, 2,722 patients have recovered from the deadly virus, while there are currently 5,064 active cases of COVID-19.

The federal capital recorded 464 new infections, raising confirmed cases to 7,163, with 6 new deaths raising fatalities to 71. Overall there have been 1,671 recoveries, leaving 5,421 active cases of COVID-19.

Confirmed cases of the novel coronavirus in Gilgit-Baltistan rose by 14 to 1,044 on Saturday morning. Overall, the region has thus far reported 16 deaths and 676 recoveries, leaving 352 active cases.

In Pakistan-administered Kashmir, confirmed cases increased by 40 to 574. In the past 24 hours, the region has reported 1 new death and 5 recoveries, leaving 11 deaths and 242 recoveries total. There are now 321 active cases of the coronavirus in the region.

Globally, the virus has now infected more than 7,739,420 people, with over 428,330 reported deaths. Governments across the world have halted flights, locked down towns and cities and urged people to stay at home, but there are signs of easements in nations that have reined in the virus’ spread to help shuttered economies recover. Overall, around 3,966,200 patients of the 7.7 million+ infected have recovered thus far.