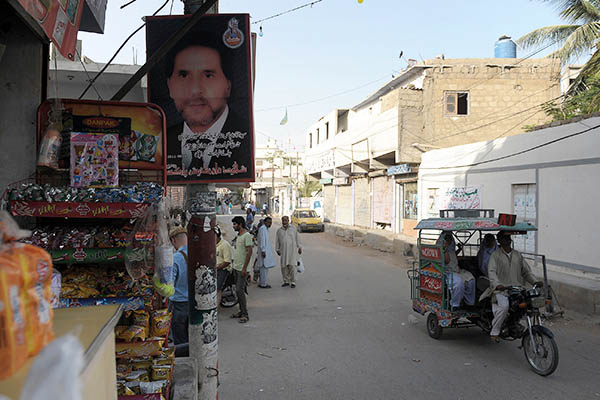 A poster of a Shia victim of a car bombing hangs outside a shop in Abbas Town. Rizwan Tabassum—AFP

Growing resentment over militant attacks is encouraging rise of sectarian violence between Shia and Sunni Muslims.

They have lost parents, brothers and friends in an unprecedented wave of sectarian violence. Despite pleas against retaliation, the anger of Pakistan’s minority Shia Muslims toward Sunnis has only grown. Growing violence between the two sides threatens a dangerous and destabilizing escalation of the state’s underground sectarian conflict.

In the Abbas Town area of Karachi, the dusty alleys are plastered with posters of local “martyrs”—young men with patchy beards and moustaches. Here, everyone has lost a friend, relative or neighbor in a bombing or a shooting. In March last year, a bomb at the entrance to the quarter killed 45 people.

Syed Zafar Alim Zaidi, a huge man with a rough, greying beard, lost his brother Akhtar in the blast. A few years before, two other brothers were murdered simply because they were Shias. “When Akhtar died I felt immense pain and anger, but I did not try to take revenge,” he said, sitting in front of the apartment blocks damaged in last year’s bombing.

After each attack, local religious leaders go round the streets trying to calm people and keep the peace. But despite this, the clamor for vengeance is rising in Shia-dominated areas. Nearly 1,000 Shia Muslims have been killed in the past two years in Pakistan, a heavy toll on the community that makes up roughly 20 percent of the country’s population of 180 million.

“In our young generation, there is this mindset that says they are killing us, why are we not killing them?” said Mohammad Ali, 32, a computing engineer. “It was not there before, it is a slow poison. It rises very slowly, but it is progressing.”

Syed Ahsan Abbas Rizvi, deputy secretary of the Majlis Wahdat-e-Muslimeen (MWM), the main Shia party in Karachi, agreed. “This thinking of revenge exists among the Shia youth, because if someone is killed in your family it is natural, but this thought should not translate into action,” he said.

Not everyone is onboard. Last year Sipah-e-Mohammed, an umbrella organization of smaller Shia groups, carried out around 50 attacks against Sunnis in Karachi, against 64 attacks by Sunnis on Shias, according to the Pakistan Institute for Peace Studies (PIPS), an independent research center.

Anti-Shia attacks have been increasing in recent years in Karachi, Quetta, Parachinar, and Gilgit. But the Shia fight-back has been concentrated in Karachi, the vast port of 20 million people where attackers can easily materialize from the city’s chaotic sprawl and melt away again afterwards.

“These tit-for-tat activities are only in Karachi and it’s intensifying,” said Raja Umar Khattab, a leading police officer in the city. “The real threat in Pakistan is the sectarian violence.”

In Karachi, the volume of violence has trebled in the past two years, with more than 200 people killed in sectarian attacks in 2013 in a city plagued by criminal and Taliban activity and kidnappings.

The roots of Pakistan’s sectarian strife go back to the early 1980s. Shias felt victimized by military ruler Zia-ul-Haq’s program of Islamization, which favored a conservative Sunni strand of Islam. In contrast Sunnis—who make up around 80 percent of the population—saw the 1979 revolution in neighboring Shia-majority Iran and feared it could spread across the border.

“This is the purpose of our existence, to stop the influence of the Iranian revolution and the Shias’ effort is to export the Iranian revolution here,” said Aurangzeb Farooqi, Karachi head of Ahl-e-Sunnat-wal-Jamaat (ASWJ), a renamed version of the SSP. In his house surrounded by security cameras Farooqi—who has survived three recent attempts on his life and is suspected of leading anti-Shia violence—says his struggle against Shias is non-violent.

Small Shia groups have been targeting the imams of mosques seen as radical, like that of Farooqi, the authorities say. Karachi police made a rare arrest this spring of a Sipah-e-Mohammad cell they said was involved in around 20 murders since 2012.

Farooq Awan, the officer leading the probe, said the cell used sophisticated methods to target anti-Shia groups like LeJ and SSP—and their financiers. “They are operating in a unique way. They use licensed arms and they have data on 150 targets, information about their families, their offices, their movements,” he said. “The level of information they have is very high.”

He said the group would stake out and observe their targets before striking—usually a swift volley of gunfire before escaping into the depths of Karachi by motorbike. The cell’s chief Syed Furqan, who is in custody, admitted his role in murdering SSP members and Sunni imams preaching at mosques seen as close to the Taliban, according to a police report.

“Furqan is the man who will go to the mosque when the body arrives and will recruit angry young Shias. He pays a monthly salary for his group members, provides motorbikes and pays their expenses,” a senior official close to the case said.

The reservoirs of anger show no signs of drying up. In a Shia mosque in Karachi one spring evening, a group of young men wait for the body of one of their friends, shot dead earlier in the day. For one young man, the time for patient forbearance is coming to an end. “You learn that this guy has been killed, then another one. Then you ask yourself ‘why are we sitting here, we should reply.’”

Peace and Stability Result of Selfless Sacrifices of...

Poorly investigated information jotted down in a biased manner. I lost my trust in Newsweek today.