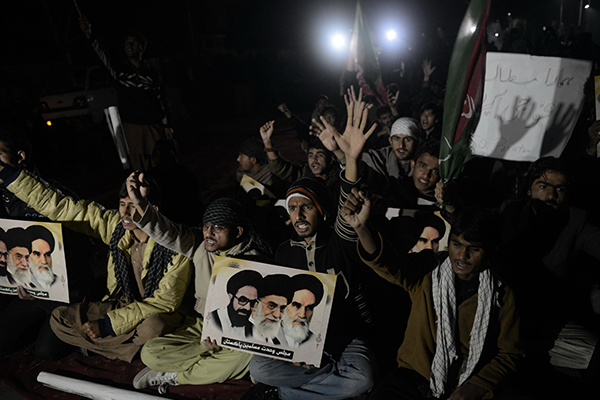 Following a spate of sectarian violence targeting Pakistan’s minority Shia community, thousands took to the streets across the country again on Thursday to demand action against the militants.

The latest wave of protests comes after the Lashkar-e-Jhangvi, a Sunni terrorist organization, blew up a bus carrying Shia pilgrims from Iran. The attack happened on Tuesday, in Mastung, some 60 kilometers west of Quetta, and killed at least 24 people. The relatives of the deceased have refused to bury their bodies until the government acts against the terrorists.

Up to 2,000 people demonstrated on Quetta’s busy Alamdar Road with the pictures and bodies of the bombing victims. The protest began on Wednesday and protestors braved freezing temperatures to spend the night in the open. They say they will not bury their dead until a military operation wipes out militants and their sanctuaries from Quetta and Mastung. Quetta’s ethnic Hazara community, which is largely Shia, staged similar protests last year after two devastating bomb attacks killed scores, and led to Islamabad sacking the provincial government.

“We will not bury our dead bodies until a clear assurance from the government that it will launch a crackdown against terrorists and their sanctuaries,” said Abdul Khaliq Hazara, head of the Hazara Democratic Party. Bilawal Bhutto Zardari, patron-in-chief of the opposition Pakistan Peoples Party expressed solidarity with the protestors and tweeted: “Pakistan: the country where even the martyred dead protest because the living have failed them.”

There were also demonstrations in Lahore, Multan, and Rawalpindi, against what protestors called the “genocide” of Pakistan’s Shia, about 20 percent of the country’s population. In Karachi, there were sit-ins at about a dozen different locations under the banner of Majlis-e-Wahdat-ul-Muslimeen, a Shia representative organization. Hundreds of protesters also blocked Faizabad interchange, which links the garrison town of Rawalpindi with neighboring Islamabad, as part of their protest against the killings.

A Human Rights Watch report this week said the terrorist group Jhangvi operates with “virtual impunity across Pakistan, as law enforcement officials either turn a blind eye or appear helpless to prevent attacks.” More than 400 Shia were killed in targeted attacks across the country in 2013, the rights group said.