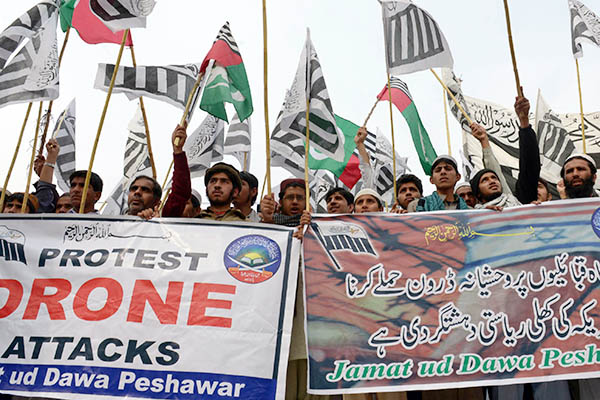 Residents of the country’s tribal areas fear violent reprisals if they speak out in favor of drone strikes.

While the Pakistani government routinely denounces U.S. drone strikes, locals say that a sizeable number of people in the country’s tribal areas support them—but the threat of Taliban reprisals makes them too terrified to speak out.

The lawless tribal areas along the Afghan border have borne the brunt of the U.S. drone campaign since 2004, with hundreds of missile strikes targeting suspected Al Qaeda and Taliban militants. Islamabad condemns them as a violation of sovereignty and counterproductive to efforts to combat militancy, while rights campaigners—and the Pakistani public—rail against them for killing civilians.

Anyone who does speak out in favor of the drones in the tribal areas runs the risk of being kidnapped, tortured, and murdered by militants—their agonizing last moments captured on camera. “Anybody who supports drone strikes, they will try to kill him. They will say that person is pro-American, a friend of the Jews,” said Gul Wali Wazir, using a pseudonym, from South Waziristan. “They will cut his throat or shoot him, They will film his false confession, kill him, and leave the body on the road with a DVD and a note saying that anybody who supports America and drones will face the same fate. I have seen a dozen such dead bodies.”

“U.S. spies” are targeted by a special militant unit, the Ittehad-e-Mujahideen Khorasan, and grisly DVDs of their last moments distributed. In one, a young man admits to bugging a car in return for $200.

After a decade of the CIA-run program, no region in the world has been hit by more strikes than Pakistan’s tribal areas. Ten days ago, one of the remote-controlled missiles eliminated the feared Hakimullah Mehsud, leader of the Pakistani Taliban.

The area is off-limits to foreign journalists and aid groups, so the precise number and identity of those killed by drones is difficult to establish with certainty. The London-based Bureau of Investigative Journalism estimates that between 2,528 and 3,644 people have been killed in 378 drone strikes in Pakistan, including 416 to 948 civilians.

A survey by the New America Foundation in 2010 found that a sizeable proportion of people—more than one in five—in the tribal areas backed drone strikes, and a number of experts have spoken of an increasing trend to support them.

The federally-administered tribal areas became a stronghold for hundreds of Taliban- and Al Qaeda-linked extremists who fled Afghanistan to regroup and launch cross-border attacks after the U.S.-led invasion in 2001. Tribal chiefs initially welcomed them, but since 2009 they have grown weary of the “taxes” the militants impose and the insecurity they bring, and are angry at them for killing elders who opposed their presence.

Safdar Hayat Khan Dawar, former head of the Tribal Union of Journalists, from North Waziristan, said the missiles were the preferred solution to the problem of militancy. “There are two options in FATA: a military operation or the drone strikes,” he said in an interview in Peshawar. “The military option, people hate it because the Army doesn’t kill militants but civilians. So if you ask people to choose, they will choose drone attacks.”

In 2009 the Army carried out a major ground operation to retake control of South Waziristan from the militants, with more than 30,000 troops pouring in for an offensive. The U.N. said more than 200,000 people were forced from their homes by the fighting.

“Those people who became internally displaced due to the military operation, those people who are victimized by the Taliban and the militants, all the families whose family members are beheaded because they were accused of spying for America—why would they oppose drone attacks?” said Nizam Dawar, director of the Tribal Development Network. Dawar’s own family in North Waziristan recently had a visit from militants after he spoke of his support for drones.

For drone supporters, tribal leaders sheltering militants only have themselves to blame if their families are killed by the American strikes. “We think this is due to their own negligence. The responsibility lies with the people who offer these terrorists a shelter,” said Arbab Mujeed-ur-Rehman of the Pakhtunkhwa Milli Awami Party. “A person who is not involved in terrorist activity does not feel threatened by the drones.”

In the markets of the tribal areas, militants hand out leaflets urging people to denounce “traitors” in their families, heightening the climate of suspicion in a region already awash with conspiracy theories.