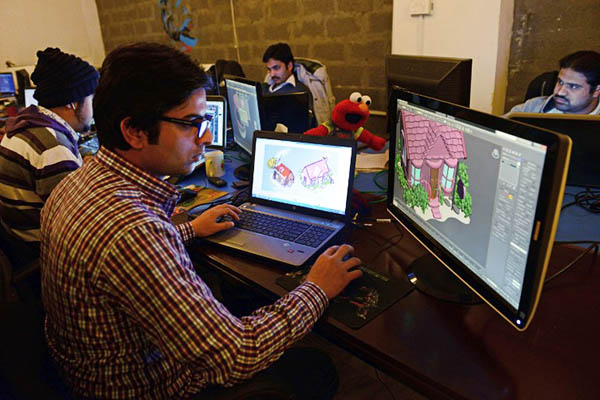 A rise in mobile game development is helping transform the country’s IT industry.

It’s a city better known for its history and culture, but a new generation of mobile game developers is bringing a slice of Silicon Valley to Lahore.

With open plan offices, mixed gender teams, gourmet catering and an emphasis on a fun atmosphere, the small but growing IT industry worth an estimated $2.8 billion is being led by young entrepreneurs like Babar Ahmed.

Ahmed, 33, left a career as a circuit engineer in Austin, Texas to found Mindstorm Studios in Lahore in 2006 with his brother Faraz. Today their studio employs 47 people thanks to hits like 2010’s “Whacksy Taxi,” which shot to No. 1 on Apple’s AppStore in over 25 countries; “Mafia Farm” in 2012 and “Cricket Power,” the official game of the 2011 World Cup.

“The idea was to put Pakistan on the gaming world,” said Ahmed, explaining he was tired of “drawing room talk” among expatriates in the U.S. about how something should be done for their homeland.

According to the government, some 24,000 people are now employed in software exports—though the figure also includes more traditional areas like financial software and healthcare.

“One of the advantages that Pakistan brings is we do have a critical mass of people with training and aptitude, an interest in developing software and art and combining them,” adds Zahir, who is also a part-time tech journalist.

At We R Play, an Islamabad-based studio based in a converted warehouse on the outskirts of the city, rows of twenty-somethings busy themselves on their computers surrounded by colorful posters, plush toys and action figures.

The company was founded in 2010 by Mohsin Ali Afzal and Waqar Azim, with a major emphasis placed on a modern office space. “We were sure from when we started that we didn’t want cubicles and I wouldn’t have a big office,” said Afzal, who returned from UC Berkeley in 2010. “We wanted to make sure we’re sitting with everyone. We encouraged everyone to take ownership of their spaces and gave them [money] to get stuff for their tables.”

Workspace and play is also seen as key at CaramelTech, a Lahore studio founded in 2011 by brothers Saad and Ammar Zaeem which is responsible for coding global 2011 mega-hit Fruit Ninja (which had over 500 million downloads) for an Australian studio. The office has a designated playroom complete with pool table, table football, and Xbox. “Every day at 4 p.m. they’re forced to leave their work and go play upstairs. We want that culture where people aren’t only working but also enjoy themselves,” he said.

Also notable in the games studios is near gender-parity, a striking fact in a country where female participation in the workforce has lagged behind for decades. People are dressed in everything from Western jeans and T-shirts to hijabs.

For some, convincing their family they are working in a “real job” wasn’t easy. “Basically my parents think I play all day and don’t work,” joked Saadia Zia, We R Play’s 24-year-old head of quality assurance department which is tasked with teasing out bugs. In addition to gaining the trust of employees’ families, the game studios have to contend with a host of issues ranging from frequent power outages to insecurity and civil unrest.

“Electricity does not work. You have to come to terms with that,” said Ahmed of Mindstorm, who plans to move his studio off-the-grid using solar panels. They also have to contend with faulty telephone lines, security threats and the ubiquitous corruption that dogs life in Pakistan. “Right outside our gate we had a car being gunned down. That affects you.”

However, the rewards outweigh the risks, he said. “It’s somewhat like the Wild West. It’s not for everybody. If you expect a level of service from the environment around you, that’s not going to happen. If you can fend for yourself, it’s great.”

It is a pleasant surprise and I am really impressed……all the best.

Excellent Work Guys! Keep it Up!

There’s one correction, Fruit Ninja was coded by Halfbrick Studios, CaramelTech did the QA part only. If you go to game’s About / Credits section you will see this as well.

Good read, and awesome to see some good games coming out from Pakistan.