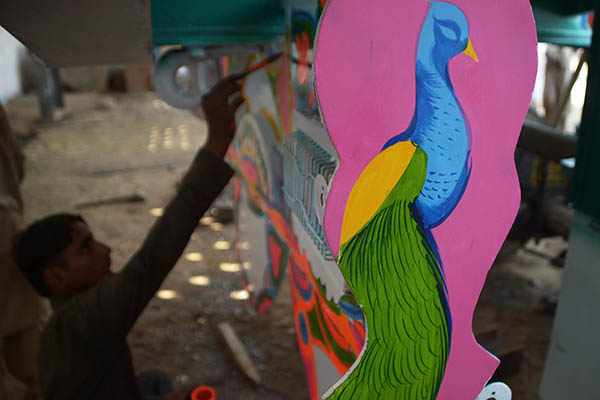 Truck artists who transform ugly lorries into flamboyant, moving works of art, fear boom times for their trade could be at an end as NATO winds down its mission in Afghanistan.

The workhorses of the Pakistani haulage industry are often ageing, patched-up Bedford and Dodge models, but almost without exception they are lavishly decorated. Artists such as Haider Ali skillfully work elaborate, colorful designs, calligraphy, portraits of heroes and singers, mirrors and jingling tassels onto the trucks. In his open-air workshop in the heart of Karachi, a goat or two browsing the dusty ground, Ali sketches out a design for a boat. Others include horses, partridges, tigers, the faces of former prime minister Benazir Bhutto or singer Attaullah Khan Esakhelvi. “The design depends on the owner of the truck. Everyone wants his truck to be different from everyone else’s,” says Ali, who left school to follow his father Mohammad into the truck art business.

Truck art has become one of Pakistan’s most distinctive cultural exports in recent years, but it is still not highly regarded at home. “The higher echelons of society don’t call it art but craft—or anything else, just not art,” said Ali.

Call it what you will, decorating trucks is big business—haulage firms and lorry owners shell out $5,000, even $10,000 a time to have their vehicles adorned. It can take a team of half a dozen artists nearly six weeks to decorate a truck, not just painting but working up intricate arabesque collages of laminated stickers.

Jamal Elias, a truck art expert from Penn State University in the United States, said it represents the largest art sector of the Pakistani economy. “You can’t say the gallery world or textile design begins to compare in size,” he said. But in Pakistan, he added, the artists “are never going to be treated as real artists as long as the social structure remains the way it is.”

For the past decade, truckers in Pakistan have been making money by ferrying supplies for the NATO mission in neighboring, landlocked Afghanistan from the port of Karachi. Profits from this work have meant they have been happy to spend on decorating their vehicles, but with NATO withdrawing from Afghanistan by the end of 2014, the artists fear the good times could be over. “There was a great deal of demand because of NATO trucking, and everyone was trying to get the work, but the decline has already started,” said Ali.

Noor Hussain, 76, who has been painting trucks in Rawalpindi for 65 years, shares his fears. “We’re afraid that because of the decrease in trucks circulating, people will lose their jobs in our business,” he said. “Because if there are fewer lorries in circulation, we will have fewer to decorate.”

Mumtaz Ahmed, another Karachi artist, said business surged under the rule of former president Pervez Musharraf, who gave Pakistan’s support to the U.S.-led invasion of Afghanistan after the 9/11 attacks. A foretaste of what might happen came in late 2011 and 2012, when the Pakistan government shut NATO’s supply routes through its territory for several months in protest at a botched U.S. air raid that killed 24 soldiers at a border post.

“We felt a real slowdown when there was the ban on NATO supplies,” said Ahmed. “Things are just getting better now. NATO has meant a good boom for us.”

But in a country with a stagnant economy and galloping inflation, why bother spending so much just to decorate a lorry? “It shows our pride, our love for our job and also that our trucks are in good condition and attractive,” said Mir Hussain, who was about to spend a small fortune repairing and redecorating a truck. The more a lorry grabs the attention with its beauty, the better its owner thinks it will attract clients, though most contracts are granted without regard to looks.

Perhaps the real reason behind the slightly shaky logic is the simple love of man for his machine. “His wife may be dying of hunger at home in the village, but the driver will still go ahead and have his truck decorated,” said mechanic Sajid Mahmood.