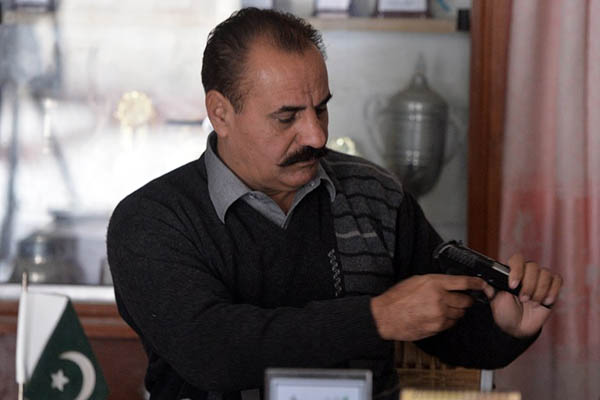 Analysts claim arming teachers in classrooms is ‘stupid’, as Khyber-Pakhtunkhwa government claims it is necessary.

Headmaster Naveed Gul walked past the armed guard at the gate into his office. As primary school pupils studied their morning lessons outside, he reached beneath his warm woolly sweater, and pulled out a gun. “This is an M20 pistol,” he said. “It’s made in China and it works perfectly.” A debate over arming teachers has surged in Pakistan once more, days after assistant chemistry professor Syed Hamid Husain opened fire on the Taliban gunmen who stormed the university campus where he worked.

Students told how the 33-year-old father-of-two died shielding them with a handgun during the attack that claimed 21 lives at the Bacha Khan University in Charsadda. Teachers there had been given permission to carry firearms after the Pakistani Taliban massacred more than 150 people, the majority of them children, at a school in Peshawar in 2014.

At the Government Primary School Akhunabad in the city, Gul slid his own gun—a Chinese knockoff of a Soviet WWII-era pistol—quickly into the desk drawer, saying weapons in school give him confidence. “You have guns with you. You can fight it out,” he said.

The headmaster, his waxed moustaches straight out of the Wild West, already has the scenario played out in his mind. “If one terrorist were to come and I’m sitting here… I will automatically take out my pistol,” he said gesturing. “So if I take cover from here, and fire with a sharp mind.”

Psychologists discussing mass shootings in the U.S. recently told AFP that post-traumatic stress can translate into such hyper-vigilance: a state of alert close to paranoia. But Gul is matter-of-fact. Militants have long targeted education in Pakistan, from the shooting of schoolgirl Malala Yousafzai in Swat in 2012 to the Peshawar massacre and Wednesday’s assault.

On Friday, the Taliban faction behind the Bacha Khan attack vowed to continue targeting schools and students, calling them “nurseries” for those who challenge Allah’s law. “I want to protect myself and my students,” Gul said.

Provincial spokesman Shaukat Yousafzai said that with 68,000 schools and just 55,000 policemen in Khyber-Pakhtunkhwa, the government cannot provide security, so it gave in to the teachers’ demand they be allowed to carry weapons. “There is no harm in using them in case of an attack,” Yousafzai said.

“These are young men,” he said. “If a fight breaks out, you know, the rush of blood, and if somebody has a gun.” Instead of killing attackers on the spot, Khan called for rooting out the long-term causes of militancy, echoing critics of a national crackdown on extremism who say it has failed to go far enough. “Let them become men of books,” he said.

Syed Hamid Husain, by all accounts, had been just such a man—an academic lecturing at a university named after a peace icon known as the “Frontier Gandhi.” Husain’s family said that changed after the Peshawar school massacre in 2014.

Elder brother Sajjad expressed a baffled pride in the actions of his kind-hearted sibling, who he said as a child would faint at the sight of blood. “We don’t know where he got that much courage from,” Sajjad told AFP tearfully at the family home in Swabi, near Charsadda, clutching his three-year-old nephew in one arm and a picture of the child’s father in the other.

The Taliban’s cold slaughter of dozens of children in the Peshawar massacre had changed his “soft” brother into something more “cruel,” Sajjad said. “He said he felt a trembling inside… that something should be done.”

In the U.S. the debate over arming teachers is nuanced. President Barack Obama’s recent tears over the shooting of 20 children in Connecticut in 2012 prompted powerful arguments on both sides, as did Republican presidential candidate Ben Carson’s call for guns in schools last October.

In Khyber-Pakhtunkhwa, for parents and students, the question appears unsettlingly one-sided. “They [teachers] can fight and kill maybe two, three, four people,” said Ehsanullah, whose son attends the Akhunabad school. “When they come, our teacher will attack them,” said 10-year-old pupil Shafey Hussain. “We are not scared of anybody.”

He spoke with heartbreaking certainty: both that the attack will come, and that the adults can save him when it does.