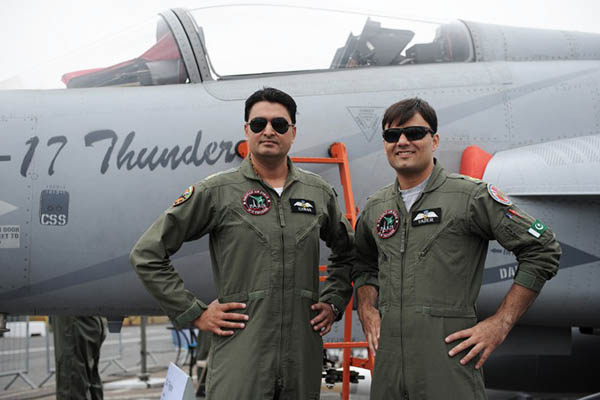 A Pakistani pilot got pulses racing on social media on Monday after photos from the Paris Air Show reminded some of Top Gun star Tom Cruise.

Squadron Leader Yaser Mudasser became an unwitting Twitter star after shots circulated of him showing off Pakistan’s new JF-17 Thunder fighter jet to a diplomat. But Mudasser was somewhat less cocky than Maverick, the cult hero played by Cruise in the 1980s hit film, when asked about the surprise attention.

“It’s funny. One never imagines that you’ll get this kind of attention when you’re training day-in day-out,” the pilot told AFP, laughing bashfully.

Mudasser has clocked up over 600 flights in the JF-17, Pakistan’s first-ever homemade jet, which was designed and built with Chinese help. “It’s superb. It’s a treat to fly this aircraft. It’s so beautiful and user-friendly,” he gushed.

But it was his colleague, Wing Commander Usman Ali, also channeling his inner Maverick in a pair of aviator shades, who wowed the crowds on the first day of the world’s premier air show. “It was an honor to fly the JF-17 over the skies of Paris. It was a moment of pride for all of us to exhibit this aircraft to the whole world,” said Ali.

Squadron Leader Yaser Mudasser is on the right guys. He is the subject of the article, who is being compared to Tom Cruise. He is not wearing Aviators. Wing Commander Usman Ali is wearing them, and he is on the left. Also, the photo used above is not what started the twitter trend.. the one highlighted by this article.. http://www.buzzfeed.com/javiermoreno/this-pakistani-pilot-looks-strikingly-like-maverick-from-top?bftwuk&utm_term=4ldqpgm#.ggev3Dg8x

is the one that indicates a resemblance.

Kudos to these young warriors who stand apart from the normal youth in discos and resturanting on parents’ millions. Tom Cruise looks like these gallant men who perform. Tom cruise just aped in animated film. He must envy these real life fighter pilots. God protect them ftom cynics.

The unsung heroes are the real heroes.