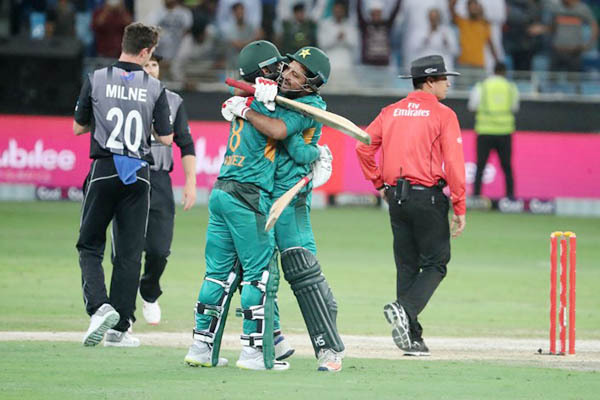 Pakistan lived up to their billing as the world’s best Twenty20 team with a six-wicket victory over New Zealand in Dubai on Friday to clinch the three-match series 2-0.

New Zealand were lifted to 153-7 by Corey Anderson and Colin Munro who made 44 each after Kane Williamson won the toss and opted to bat on a slow paced pitch.

Pakistan won the first match by two runs in a last-ball finish in Abu Dhabi on Wednesday. Hafeez, who hit Adam Milne for the winning boundary, and Malik came together with 50 needed off the last five overs. Hafeez hit two towering sixes off leg-spinner Ish Sodhi in the 17th over to bring the target down to 23 in the last three overs.

Hafeez hit two sixes and a boundary in his 21-ball innings.

“It’s down to the effort of the players,” said Sarfraz. “We have a good balance, with Hasan Ali at 10. We know we can get 150-160. So if we start well and if we don’t let too many dot balls in the middle, we have the experience of Hafeez and Malik as well.”

New Zealand skipper Kane Williamson gave credit to Pakistan. “Credit to the way Pakistan played. They have a clear pattern of play which they’ve executed here in the U.A.E.,” said Williamson. “I thought the first half was clinical from us. Got a good score on the board. It’s a game of really small margins.”

Earlier, New Zealand were again derailed in the middle overs.

Munro, who has the best strike rate of 163 amongst current Twenty20 players, lifted spinner Imad Wasim for six off the very first ball of the match as New Zealand raced to 50 without loss in just 5.3 overs. But just like the first match their innings fell apart once Glenn Phillips (five) and Munro departed in the seventh over as Pakistan’s bowlers, led by pacer Shaheen Shah Afridi, pulled back the scoring rate.

Munro hit four boundaries and two sixes off 28 balls before he was stumped off spinner Hafeez as his miscued shot trickled behind the stumps to Sarfraz who claimed a stumping with the batsman out of his crease.

Anderson hoisted Hasan Ali for two boundaries and a six in the 17th over to help New Zealand add 52 in the last five overs.

Shaheen finished with brilliant figures of 3-20 in his four overs.

The third and final match will be played in Dubai on Sunday.