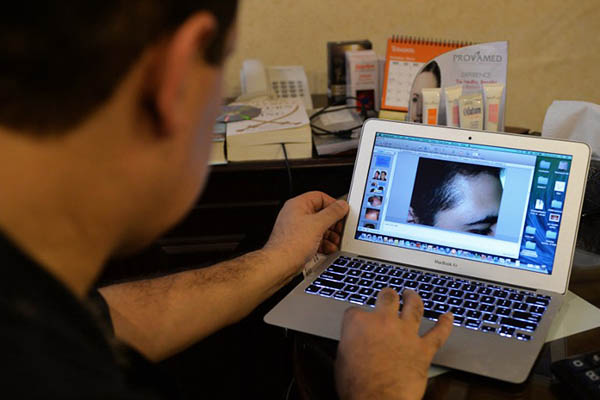 Hair transplants have gained popularity since 2007, when Nawaz Sharif returned from exile with a full head of hair.

Mohammad Shahid’s eyes lit up when he saw his once bald cousin come home one day with a head full of hair and a strutting gait to match. A handsome but follicle-challenged young man, he decided the time was ripe to restore his honor, battered by years of taunts that follow the barren-headed and the beardless in Pakistan.

In Peshawar, home to underground Taliban hideouts and a gateway for trade to Afghanistan, men go about their business in the crowded dusty streets, their faces covered by bushy black beards that would make Captain Haddock proud. The city’s roads are filled with giant billboards of celebrities once bald but now all smiles. They extol the virtues of manhood restored surgically with a few well-placed tufts of hair.

“When I saw my cousin return from his procedure, I was in shock. I said to myself: I have to have it too,” said the thirty-something excitedly as he prepared to have the procedure at a local hair transplant clinic. “Hair is like our weapon against society.”

In Pakistan, hair is synonymous with virility to the point that even some Taliban fighters buy ointments to give their long locks and beards a lustrous finish. Woe to those without: they are labeled “ganjas,” a deeply derogatory term. “Here, calling someone a ‘ganja’ is a stigma but over there [in the West], saying ‘bald’ is not that bad,” explains Dr. Humayun Mohmand, one of the first doctors to offer the treatment in Pakistan.

Mohmand opened his practice in the early 2000s, but transplants, done under local anesthetic, did not take off immediately. The breakthrough moment came at the end of 2007, when Nawaz Sharif, who was balding when he was deposed as prime minister by Pervez Musharraf eight years earlier, returned from exile with a full head of hair.

“After the hair transplant … by Nawaz Sharif and Shahbaz Sharif [his brother, the chief minister of Punjab province] this has become very popular,” said Dr. Fawad Aamir at his Peshawar clinic, among a group of patients seeking new manes. “[Before] they were very afraid of this, that something is going to happen, that cancer will develop, that infection will lead to the brain.”

Among them was the son of Farid Khan Khattak, a big man who fills the room with hearty laughter. “My son had some kind of inferiority complex because he had some gaps in his hair,” he said. “One of my friends told me that instead of a hair transplant I should buy a motorbike for my son. But my son insisted: ‘Instead of a motorbike I want a transplant,’ so it’s for his happiness.”

Since 2006, Mohmand has conducted 8,000 operations compared with 1,000 during the previous five years.

Arranged marriages remain the norm in Pakistan and surgeons recall the anguish of patients whose engagements have been scuppered by baldness. “One of my clients had lost a lot of hair and two or three marriage proposals did not mature,” said the doctor of a female patient. “After that, she came to give me the invitation to her wedding. That day, she had tears in her eyes. She said, ‘You are the person who has made my life.’”

Today, there are nearly 120 hair transplant clinics in Pakistan, according to official figures, with a dozen in Peshawar alone. The operation generally costs from $400-$1,000, with some top clinics charging up to $6,000—a fraction of what it costs in the West, but still well out of reach for most Pakistanis.

Many clients come from abroad, in particular the Pakistani-Afghan diaspora who come to see their friends and family—and return more hirsute.

Maihan, a cook from Denmark, finds himself in one such clinic in Peshawar. The young Afghan knows that the shaven-headed Bruce Willis look isn’t displeasing to the fairer sex in the West. “In Europe, in Canada, in Australia and in the United States, the girls don’t care, but here guys must have long hair,” he said.

Hairless heads aren’t the only worry. Dr. Asif Shah says he has also performed a number of beard transplants on patients keen to show their piety with a healthy growth.

Fawad Aamir recalls with pleasure the visit of a Taliban commander’s son who had grown frustrated with his patchy beard while fellow Islamist rebels proudly sported bushy specimens. “A doctor tried to convince the man that ‘you don’t grow beard because this is the beard given to you by God’,” he said. “And he said ‘No, I want to have this like [Islam’s Prophet]’. So we went ahead and six months later he had a very big beard and he was very happy.”