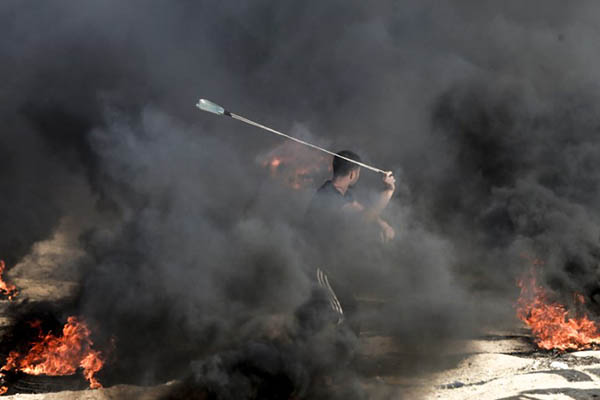 A Palestinian who threw a rock at Israeli troops in the occupied West Bank was shot dead by a soldier on Wednesday, the Israeli army said.

It said the troops were on a search and arrest operation in the village of Nabi Saleh, northwest of Ramallah, when they were confronted by at least 10 stone-throwing Palestinians who hit one soldier in the head. The soldier struck by the rock then fired at the Palestinian who threw it, who was given medical treatment but later died, the military said in a statement.

An activist group named him as Ezzedine al-Tamimi, from Nabi Saleh, citing witnesses saying he was more than 40 meters from the soldiers when shot. There was no confirmation of his identity from the Palestinian health ministry.

In a statement on Twitter, the head of Human Rights Watch in Israel warned troops could have used unnecessary force. “International law only permits use of lethal force when there’s an imminent threat to life. Hard to see how throwing rocks meets that bar,” Omar Shakir said.

Last month a soldier from the Duvdevan special forces unit was fatally struck on the head by a granite slab thrown from an upstairs window during an arrest raid in the Amari Refugee Camp in Ramallah. Israeli forces regularly carry out raids in Palestinian-administered parts of the West Bank to arrest suspects they accuse of militant activities against Israel.