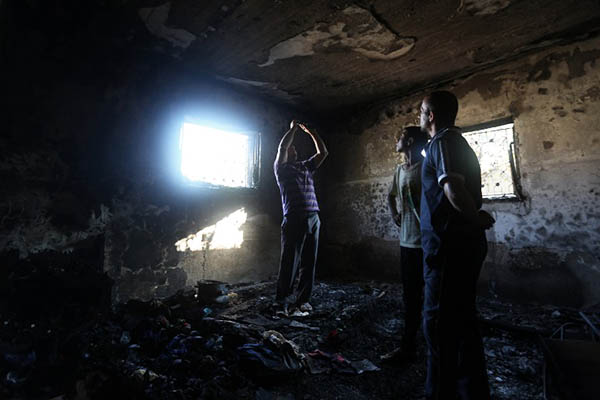 Jewish settlers from Israel believed to have staged firebombing on Duma village.

A Palestinian toddler was burned to death and four family members injured in an arson attack by suspected Jewish settlers on two homes in the occupied West Bank on Friday.

Israeli Prime Minister Benjamin Netanyahu called the firebombing in the village of Duma near the northern city of Nablus “an act of terrorism in every respect” and ordered security forces to hunt down the perpetrators. The attack further stoked tensions between Israelis and Palestinians, two days after Netanyahu controversially approved 300 new settler homes in the West Bank.

The Palestine Liberation Organization said it held Netanyahu’s government “fully responsible” for the death of 18-month-old Ali Saad Dawabsha, arguing it was “a direct consequence of decades of impunity given by the Israeli government to settler terrorism.”

According to Palestinian security officials, four assailants believed to be Jewish settlers set a house on fire at the entrance to the village and scrawled graffiti on a wall before fleeing to a nearby Jewish settlement. The Israeli military said two homes had been set ablaze, and a child killed and four family members wounded. It added that the graffiti had been written in Hebrew.

Palestinian sources said those wounded included the toddler’s parents and another child.

Local media reported that the graffiti said “revenge” and “long live the Messiah” and that the attackers threw firebombs inside the two homes, one of which was empty.

Israeli Defense Minister Moshe Yaalon said such attacks would not be tolerated, adding “we will not allow terrorists to take the lives of Palestinians.” The Israeli military said it was working to find the perpetrators.

The arson attack follows days of tensions surrounding settlements in the West Bank, with rightwing groups opposing the demolition of two buildings under construction that the Israeli High Court said were illegal. The demolition began on Wednesday, but Netanyahu authorized the immediate construction of 300 settler homes in the same area the same day.

Settlers had clashed with police when they moved in to demolish the buildings. Education Minister Naftali Bennett, of the rightwing Jewish Home party, had opposed the demolition and addressed protesters at the site.

Netanyahu holds only a one-seat majority in parliament following March elections and settler groups wield significant influence in his government.

West Bank settlements are viewed as illegal under international law, but not by the Israeli government. They are also major impediments to peace negotiations with the Palestinians, who see the land as part of a future independent state, and Western nations have called on Israel to halt construction.

Extreme-right Israeli activists have committed acts of vandalism and violence against Palestinians and Arab Israelis for years, attacking Christian and Muslim places of worship and even Israeli soldiers.

The attacks are known as “price tag” violence—a euphemism for nationalist-motivated hate crimes by Jewish extremists.