Palestinians Warn of ‘Chaos’ if U.S. Embassy Shifts to Jerusalem 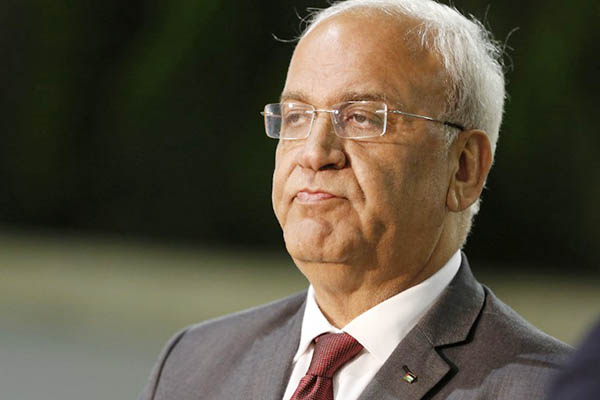 A senior Palestinian official warned U.S. president-elect Donald Trump on Friday that moving the American embassy to Jerusalem would destroy prospects of peace with Israel and push the region into turmoil.

The remarks by the secretary general of the Palestine Liberation Organization, Saeb Erekat, came as Israeli officials praised Trump’s decision to nominate hardliner David Friedman as envoy to the Jewish state.

The Palestinians regard east Jerusalem as the capital of their future state. Moving the U.S. embassy from Tel Aviv before a final agreement on the conflict “will be the destruction of the peace process,” Erekat told journalists.

He also warned of the potential outcome of moving the embassy and a change in the “longstanding position” of the United States that considers “the settlements as illegal.”

“I look David Friedman and Trump in the eye and tell them—if you were to take these steps of moving the embassy and annexing settlements in the West Bank, you are sending this region down the path of something that I call chaos, lawlessness and extremism,” he said.

Friedman, a bankruptcy attorney, supports settlement expansion in the occupied West Bank, characterized by successive U.S. administrations as an “obstacle to peace” with the Palestinians.

In a Trump transition team statement on Thursday announcing his appointment, Friedman said he wanted to work for peace and looked forward to “doing this from the U.S. embassy in Israel’s eternal capital, Jerusalem.”

Israeli Prime Minister Benjamin Netanyahu and members of his right-wing government welcomed on Friday Friedman’s nomination. A source in Netanyahu’s office said the premier was “pleased” with the appointment.

“He knows David Friedman has the full confidence of president-elect Trump and looks forward to working closely with him,” the source said, speaking on condition of anonymity.

The United States and most U.N. member states do not recognize Jerusalem as Israel’s capital, and the city’s status is one of the thorniest issues of the decades-long Israeli-Palestinian conflict. Israel captured Arab east Jerusalem in the Six-Day War of 1967 and subsequently annexed it in a move never recognized by the international community.

The Palestinians claim it as the capital of a future state.

The Yesha council, which represents the more than 400,000 Israeli settlers in the West Bank, praised the new ambassador-designate. “Friedman has a deep love for all of the land and people of Israel, including those in Judaea and Samaria,” the group’s foreign affairs envoy Oded Revivi said in a statement on Friday, using the biblical term by which the Israeli right describes the West Bank. “His knowledge and wisdom of the issues will strengthen the bridge between our great nations.”

Trump may not formally abandon U.S. support for an eventual “two-state solution” but Washington will likely not press its Israeli ally to make difficult concessions to revive the moribund peace process.

Trump’s spokesman Jason Miller made clear on Friday that Friedman has the president-elect’s full support and that the plan to move the embassy will stand.

The Palestinians, however, were not entirely convinced Trump’s administration would indeed live up to its election promise of moving the embassy, and allow its ally Israel to move forward with settlement activity. Pushed on whether he thought Trump would indeed move the embassy and allow the annexation of West Bank settlements, Erekat said: “I don’t think they will do it.”

“The United States at the end of the day is a country of institutions, and they are guided by their national interests,” he said.