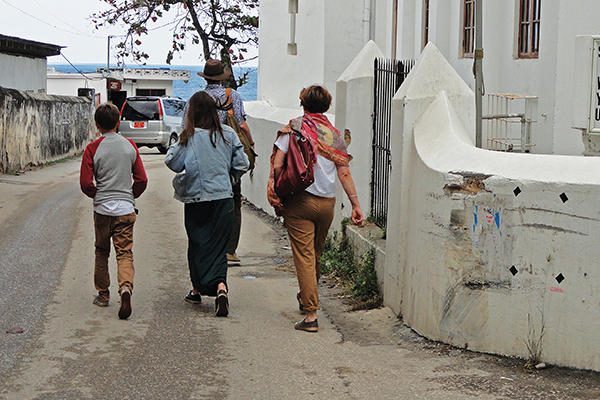 Was the acid attack on two British teens motivated by religion?

Men in long white kanzus glide through ancient alleyways like dhows slicing through the Indian Ocean. A vendor of coffee and sweets offers a free Arabic espresso. The cellphone tone of a black-burqa-clad Arab teller rings with the theme to Sex & the City. Tourists—many of them backpackers—and locals seem hardly to notice one another, and maintain a respectful distance.

On the evening of Aug. 7, Londoners Katie Gee and Kirstie Trup, both 18, were en route to a seaside restaurant here. Near the corner of Suicide Alley and Kenyatta Road, two men passed on a Vespa, splashing the girls with tindikali or battery acid.

The two girls came running down the street to Baboo café. Trup ran straight to the sea and, with the help of a local man, began washing the acid off her body. The salt water would bring vital relief to her injuries. Back at the café, two waitresses, who had run outside, heard screams coming from inside the restaurant “from the toilet.” “The short one came up from the sea screaming, ‘My face, my face!’” and began calling for her friend, one of the waitresses said.

Gee came out of the washroom with almost no clothes on—the chemical substance had burned through her dress. Her back and shoulders were especially blistered, noted the waitresses. The wounds suggested that the substance may have been thrown from behind. Luckily the girls’ faces seem to have been spared. Gee (the taller one—the girls look alike, which created some confusion in initial reports on the attack) seems to have taken the brunt of the attack, though she threw her arms around Trup in a protective gesture, and in doing so, inadvertently burned her best friend.

After a brief stop at a local clinic, the pair was flown to a hospital in Dar es Salaam, Tanzania’s economic capital, 20 minutes away by plane, before a medevac flight took them to London. Surgeons at the Chelsea and Westminster Hospital treated them for injuries sustained to their necks, chests, and hands. The doctors announced at a press conference that Gee and Trup were “doing well.” On Aug. 11, Trup left the hospital. Gee, who sustained the most serious wounds, remains in hospital and, according to surgeons, will likely need a skin graft.

The motives behind the attack remain frustratingly unclear and the perpetrators remain at large. Zanzibar’s police were quick to say it was “isolated and not religiously motivated,” with the island’s minister of tourism offering $6,000 for information that would lead to an arrest. Witnesses quoted in The Telegraph said the two girls had been involved in an altercation in the days preceding the attack with the Muslim owner of a grocery store in Stone Town—and that a local woman had shouted at them, slapping one of the two, in reaction to their singing Western songs.

Another resident said the girls may have spurned the advances of bothersome “beach boys” from mainland Tanzania, many of whom troll the beach for young Western women hoping for an easy ticket to a better life. Witnesses who saw the girls run to Baboo café had also mentioned seeing a young man in town with what appeared to be recent scarring on his forearms.

Meanwhile, a third-generation Indian developer said the attack could have been a threat after the girls discovered a local had a hand in the till of the Catholic-owned Monica School, where they were volunteering, and feared the girls had reported the theft. The two were winding up a three-week stint as volunteers at a local church serving the island’s small Christian minority. And though on the night of the attack Gee and Trup were reportedly appropriately dressed, some say their casual Western demeanor may have been perceived by locals as indiscreet and disrespectful to the island’s conservative Muslim community.

Friends in London suggested that the girls were singled out because they were Jewish, though, according to their parents, they had been careful not to reveal jewelry emblematic of their faith. “We know it is a Muslim country,” Trup’s father, Marc, told The Times of London. “They were Western girls. Unfortunately, they went out during the month of Ramadan.”

Experts in East African culture say this attack against women is the first such incident of this kind in the region. Indeed, it is the sort of attack usually associated with places like India and Pakistan, often the outcome of a love triangle gone wrong. However, a recent rash of riots, church burnings, and murders would seem to contradict the suggestion that the acid attack was an isolated event.

In 2008, a publisher and the editor of a local newspaper based in Dar es Salaam were attacked by machete-armed thugs who threw acid on their faces in an apparent attempt to stop further investigation into corruption. In January 2012, unidentified attackers threw acid in the face of Sheikh Fadhil Suleiman, a moderate Muslim cleric. And within the last 10 months, two Christian leaders were shot—one fatally—in Stone Town.

Experts in East African culture say this attack against women is the first such incident of this kind in the region. Indeed, it is the sort of attack usually associated with places like India and Pakistan, often the outcome of a love triangle gone wrong.

Suspicion has arisen that the separatist Islamic group Uamsho (Swahili for “The Awakening”) provoked the attack on Gee and Trup. Uamsho and radical Islam, say Western newspapers, have become a conduit and easy recruitment platform for the impoverished, and those who feel the government has marginalized their needs through corruption and land grabs. Police detained five men for questioning but released them three days later. Until recently, a restaurant in Stone Town doubled as office for leaders of Uamsho. It is now empty, the Imams unavailable for comment, since police have thrown them all in jail.

However, many locals question the purported Islamic connection. The girls’ visit coincided with Islam’s holy month of Ramadan, and the attack took place at an hour when observant Muslims would have been inside participating in the futari, or the breaking of the fast. Indeed, tour companies often warn their clients not to wander Zanzibar’s streets during futari since no one would be around to help them if something bad occurred.

“The problem is not religious,” Muhiddin Zubeir, the executive secretary of Jumuiya Ya Maimamu Zanzibar—the Zanzibar Institute of Imam Leaders—told Newsweek. “This was 100 percent political.” Uamsho may be “a propagandistic political entity,” he says, “but Islam has no business hurting people in Zanzibar … these are just bad people [who committed the attack]. They can be any ethnicity or religion.”

Zubeir even went so far as to suggest that the recent violent incidents in the region were the work of an “individual politician in Tanzania trying to curry favor with constituents in advance of an upcoming constitutional referendum.” Zanzibar and mainland Tanzanians have been at loggerheads since 1964, when Zanzibar merged with newly independent United Republic of Tanzania. The island has always wanted a separate Muslim identity from the Christian mainland. Now, many Zanzibaris fear that the international community will brand their island a terrorist haven, destroying the pillar of its economy—and, in turn, its bid for independence.

Zanzibar police say they hope the girls will return to Stone Town to help identify the perpetrators. Because the streets were deserted no one seems to have witnessed the attack, only its tragic aftermath.

A British anthropologist and former longtime resident of Zanzibar now residing in the U.K. observed, “When locals start interacting with foreigners, especially young and from the U.K., it is nearly always nasty, sexually charged, and never straightforward.”

Edward Busungu, branch manager at the Art in Tanzania project in Stone Town, told Newsweek they give all volunteers a spoken orientation advising them to cover up, not take photos of Zanzibaris without first asking, and when out during Ramadan they should not eat in front of fasting locals. Busungu vowed to warn travelers in the future about the potential problems of mixing with “beach boys.” He intimated, however, that the girls were not mixing with local beach boys. “They were afraid of dating anyone.”