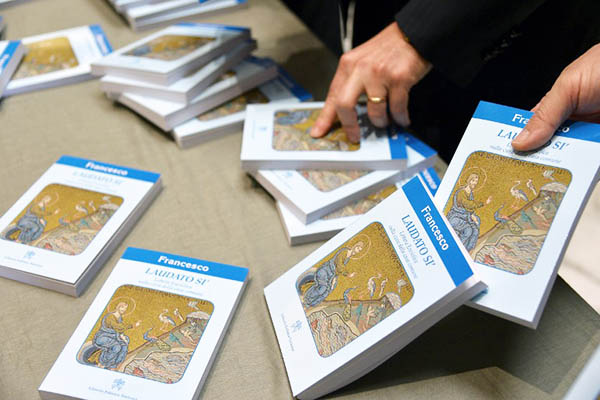 Pope Francis’s encyclical on the environment provides a massive mobilizing boost for efforts to reach a U.N. deal on climate change this year, campaigners and analysts said Thursday.

For many people, the 184-page Laudato Si could transform climate from a remote environmental problem into a moral issue demanding their involvement, they said. Its impact could be far-reaching in the effort to conclude a U.N. accord on curbing greenhouse-gases, due less than six months from now, said some.

“The pope’s message can only help strengthen the momentum toward an agreement in Paris,” said Elliot Diringer, executive vice president of the Center for Climate and Energy Solutions (C2ES), a U.S. think-tank. “[He] is injecting a powerful moral voice into a debate usually mired in science, politics and economics. He speaks to our collective conscience, and while he’s unlikely to win over many skeptics, he’s educating countless others about the stakes and the urgency.”

Alden Meyer of the Washington-based Union of Concerned Scientists (UCS) in Washington said the message would resonate particularly in countries with large Catholic populations but would also reach a wider non-Catholic audience. In the U.S., “30 percent of senators and representatives are Catholics and the pope is coming to speak to a joint session of Congress in September,” said Meyer. “It will be interesting to see how he is received, because this is a very powerful message. It gets people to step out of their day-to-day roles and ways of looking at things, and maybe think a little bit more deeply about the kind of world we are leaving to future generations.”

The long-awaited encyclical named climate change as “one of the principal challenges facing humanity in our day.”

“If present trends continue, this century may well witness extraordinary climate change and an unprecedented destruction of ecosystems, with serious consequences for all of us,” it warned. It lashed inequality, saying poor countries that are least to blame for rising seas, worsening drought and flood will feel the impacts worst, and needed the help of rich economies.

Rich countries admit they bear historical blame for emitting most of the greenhouse gases behind today’s warming. But they argue tomorrow’s warming will come from emerging giants like China and India, which are voraciously burning oil, gas and coal. These countries retort they are still fighting to rise out of poverty and, for now, still need cheap fossil fuels.

Climate specialists, though, say the fast-falling cost of wind, solar and other cleaner technologies can now widely substitute for fossils, but poorer countries need help to implement them. Felipe Calderon, a former Mexican president who is chair of the Global Commission on the Economy and Climate, said the pope had now taken a knife to this Gordian knot.

“We can boost the kind of economic growth that can reduce poverty while combatting climate change,” said Calderon. “But to achieve this, we must take bold decisions. This is why the papal encyclical is so opportune and welcome, because we all need its guidance as we face the most important challenges of the 21st century.”

The pope’s call for the phase-out of “highly polluting” fuels could spur a widening campaign to disinvest from coal, oil and gas, suggested some observers. “We hope [the encyclical] will inspire Catholic communities around the world to look at how their own investments might be financing climate change and to commit to disinvesting from fossil fuels as a matter of faith,” said Ellie Roberts of a cross-faith Christian charity, Operation Noah.

The talks, under the U.N. Framework Convention on Climate Change (UNFCCC), aim at limiting global warming to two degrees Celsius (3.6 degrees Fahrenheit) over pre-industrial times. The negotiations, due to be concluded at a conference in Paris running from Nov. 30 to Dec. 11, are deep in problems. They range from scrutiny of national carbon-curbing pledges, the mustering of $100 billion in annual climate finance promised by rich countries and even the legal status of the accord itself.

“This clarion call should guide the world towards a strong and durable universal climate agreement in Paris,” said UNFCCC chief Christiana Figueres. “Coupled with the economic imperative, the moral imperative leaves no doubt that we must act on climate change now.”

The Satellites show that we’ve not had any significant warming in 18 years. None of the doomsday predictions of academics have come true. We are not seeing more floods, or more droughts, or more rain or more snow. Polar bears are thriving. Global sea ice is back to normal.

Yes there are some trends. Hurricane activity has decreases. And rising CO2 has led to a general greening of the planet with record harvests.

That’s the evidence. But global warming alarmism is a religion. And yes the activists truly believe that this time they will get an agreement. Much as they have truly believed that they got an agreement at every single climate talks since Climategate.

And no doubt they will come out of Paris trumpeting their fantastic agreement. But if we look at the fine detail, we will no doubt find that common sense has prevailed and it is yet another worthless deal amounting to little more than agreeing to meet next year.