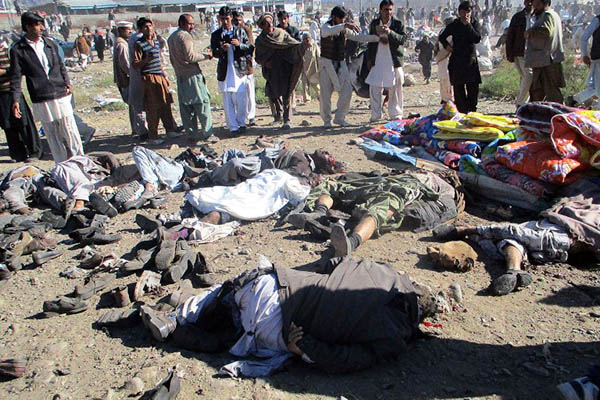 At least 20 people killed, over 40 others injured in explosion claimed by Pakistani Taliban.

A bomb exploded at a market in Parachinar on Saturday in a mainly Shia area of the tribal belt, killing at least 20 people and wounding 40 others, officials said.

The bomb detonated in a crowded vegetable market in Parachinar city, the capital of Kurram tribal district on the Afghan border. “20 people have been martyred,” the Pakistan military said in a short statement, adding that the injured had been taken to military and civil hospitals in Peshawar.

“Troops from army and [paramilitary] Frontier Corps are under taking relief and rescue operations,” it said.

Iqbal Zafar Jhagra, governor for Khyber-Pakhtunkhwa province, confirmed the death toll in a televised interview with Geo News. He said at least 40 people were wounded in the blast, 12 critically.

Ikramullah Khan, a senior government official in Parachinar, told AFP that the blast was caused by an IED [improvised explosive device] hidden in a vegetable box.

In a telephone call to AFP, the Hakimullah Mehsud faction of the Tehreek-e-Taliban Pakistan (TTP), claimed responsibility for the attack. “It was to avenge the killing of our associates by security forces and to teach a lesson to Shias for their support for Bashar al-Assad,” said the group’s spokesman Qari Saifullah, referring to the Syrian president.

Saifullah warned that his Sunni Muslim group will continue attacking Shias if they back Assad, whose regime is entrenched in a civil war that began in 2011 and has claimed more than 310,000 lives.

In December 2015 an IED blast at the same market killed at least 23 people and wounded more than 30.

Prime Minister Nawaz Sharif expressed grief over the latest loss of life, his office said in a statement.

Kurram is one of Pakistan’s seven semi-autonomous tribal districts, which are governed according to local laws and customs. The district is known for sectarian clashes between Sunnis and Shias, who make up roughly 20 percent of Pakistan’s population of 200 million.

Pakistan’s battle against an Islamist insurgency began in 2004 after the U.S.-led invasion of Afghanistan forced Taliban and Al Qaeda militants to flee across the border.