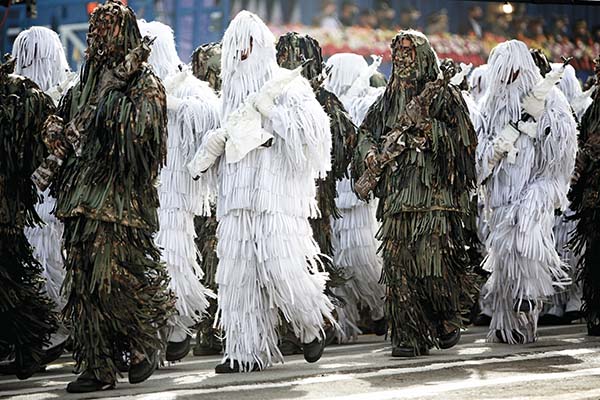 Those are no Halloween costumes, but they sure are scary. Iranian soldiers donned ghillie suits, a type of camouflage uniform (green for foliage, white for snow) to march in their Army Day parade. The military showed off its S-200, a Russian antiaircraft missile, as well as a new radar attack drone called Sarir, Farsi for “throne.” In a round of what the West has largely chalked up to bravado, the brass made comments on their preparedness for an attack by Israel, with Army chief Gen. Ataollah Salehi comparing that country to a dog that can only bark. Gen. Hassan Firouzabadi weighed in: “We see Israel’s threat as a scream that comes out of fear. If they do anything wrong, there will be no Israel left on the world’s political map.” This will be Mahmoud Ahmadinejad’s final Army Day as president, as he leaves office on Aug. 3.