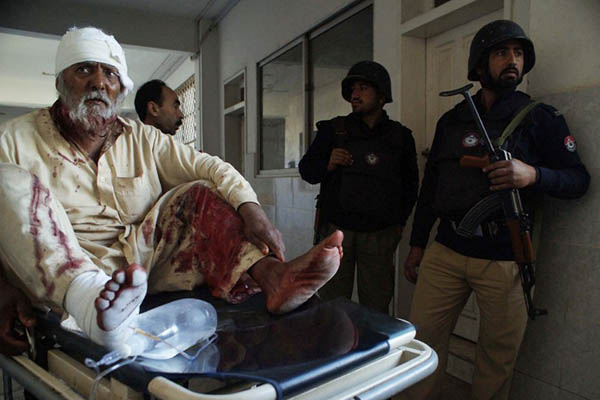 A man receives treatment after being injured in Peshawar. A. Majeed—AFP

One militant and civilian killed in separate incident in Peshawar.

Around 1,000 paramilitary troops backed by helicopters are battling separatists in Balochistan province, with the rebel death toll rising to 13 on Thursday as fighting continued into its second day.

The clash with separatists began on Wednesday in the area of a gasfield in Pirkoh. “Security forces have killed at least 13 miscreants who were hiding in the gasfield when they refused to surrender,” said Manzoor Ahmed, a spokesman for Frontier Corps. There was no loss on the security forces’ side, he added.

Provincial Home Minister Sarfraz Bugti said the militants were members of the Baloch Republican Army (BRA). “We have evidence that they were members of the BRA and were miscreants,” he said. “We took this action to set up peace in the region and we will act against the miscreants wherever we get an information about them,” he added.

Balochistan, Pakistan’s largest but least developed and most sparsely populated province, has been afflicted for decades by a separatist insurgency that was revived in 2004.

One militant and a civilian were also killed during an attack on a checkpoint in Peshawar on Thursday, which has borne the brunt of a more than decade-long homegrown Islamist insurgency. Thursday’s incident in Peshawar erupted after military personnel at a checkpoint intercepted a suspicious man and he took out his gun and started shooting, said senior police official Omar Rana.

“The attacker and a passenger in a van were killed and six others were wounded in the exchange of fire,” Rana said. The incident took place close to the U.S. consulate at the entrance of Peshawar garrison and just a mile away from the Army Public School where Taliban gunmen killed 154 people, most of them students, in December.