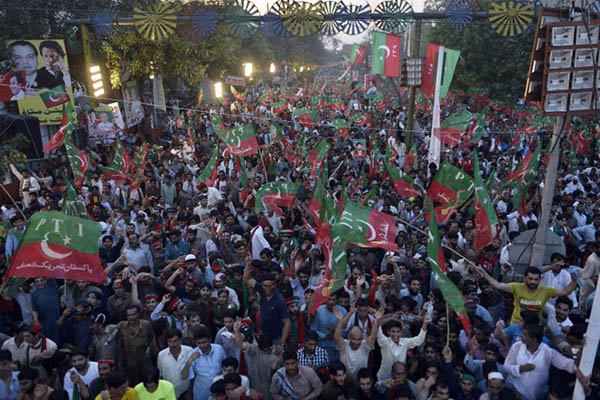 Sharpening the instruments of Sharif’s downfall.

Nine opposition parties got together on Tuesday and announced the terms of reference for the commission they want set up to investigate Prime Minister Nawaz Sharif following the Panama Papers revelations. The spearhead party is Imran Khan’s Pakistan Tehreek-e-Insaf with its street power; the others are allies. In 2014, when Khan came out on the roads, these parties had stayed neutral. This time they are not only willing to support him but are helping him sharpen the legal instruments of Sharif’s downfall. Why has this happened?

The Pakistan Peoples Party seems the most offended. One, it wants to revive itself in the Punjab where Khan is overtaking Sharif on the street. Two, it wants to wean Sharif from backing the Army in Karachi where the PPP is under pressure from the Rangers. Three, it wants to complete the transition of leadership downward from Asif Ali Zardari. Four, it wants to come back on the popular radar where sharp rhetoric scores election points.

The Muttahida Qaumi Movement wants to punish the ruling Pakistan Muslim League (Nawaz)’s backing of the harassment of its workers in Karachi. It also wants Sharif to let go of the hunt of its leader-in-exile, Altaf Hussain, and stop furtively backing the breakaway MQM splinter party under Mustafa Kamal. All the opposition parties perceive a widening gap between the Army chief and Sharif and want to tread the familiar path of isolating the elected ruler before his fall.

There is a general tendency of opposition aggression that works when the people are perceived to be in distress. The template here is of course Khan, whose angry rhetoric is seen to be going down well with the masses. The media too is not immune to this Third World weakness for denunciation. Despite the absence of any extraordinarily negative economic indicators, the country seems to be hurtling toward instability. The coming months will be bad for governance and the situation might become critical if the opposition parties decide to hit the road together with Khan.

1) Will the PPP trust IK as opposed to NS? Are they so naive not to understand their own consequences should the government meet instability? What will be their share should IK’s plans succeed?