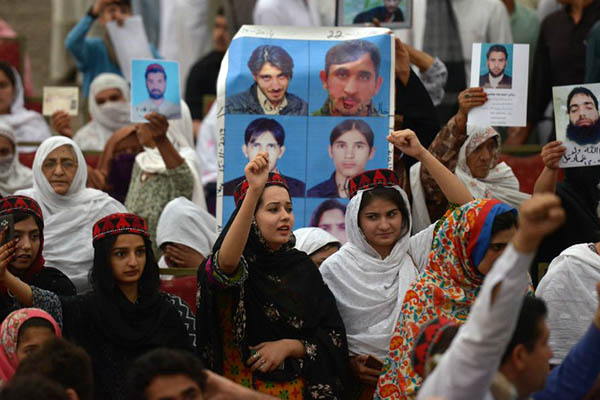 The Pashtun Tahhafuz Movement (PTM) displayed its genuine numerical muscle in Peshawar on Sunday, demanding rights Pakistan has long denied to the Pashtun. Triggered by the Karachi murder of a South Waziristan shopkeeper at the hands of a police officer in a fake “encounter,” the movement is asking questions that the state of Pakistan cannot answer. The gathering of several thousand from across Pakistan’s north, including the tribal areas, asked “da sange azadi dey” (what kind of freedom is this?). In addition to basic human rights, the demonstrators want to be resettled in their native lands following years of military operations in the Federally Administered Tribal Areas that forced them to evacuate and live as refugees in their own country.

Decades ago, Pakistan made the decision to “preserve” the tribal society of the Pashtun by keeping them separate from the rest of the country, resulting in little development and enforcement of primitive laws. As the Pashtun population outgrew FATA, it spread to the rest of the country through internal migration, destroying the roots of Pashtun culture. Nobody paid attention to this until “internal” became “external” and residents of FATA migrated to the Middle East. Then the Afghan jihad spawned local warlords who destroyed the jirga system of the tribes, and mere savagery replaced Pakistan’s badly scuffed administration. After this, Pakistan had to suffer the consequences of the original decision to retain FATA as a kind of tribal museum, without schools and without economic development. Karachi in time became the most populous Pashtun city in the world. Because of lack of policy elsewhere, it too started to become lawless like FATA.

Traditionally, the Khyber-Pakhtunkhwa-based Awami National Party has represented the Pashtuns and sensitized them about their enforced backwardness. The PTM is doing them one better by demanding Pakistan retrace its steps and treat them as full citizens, not refugees in their own land. The truth is that the Pashtun represent the failure of Pakistan to become a normal state. The country was divided into Bangladesh and Pakistan in 1979 because of the mistakes it made in its evolution. Now the Pashtun want a correction that Pakistan would do well to understand before it suffers yet another tragedy.