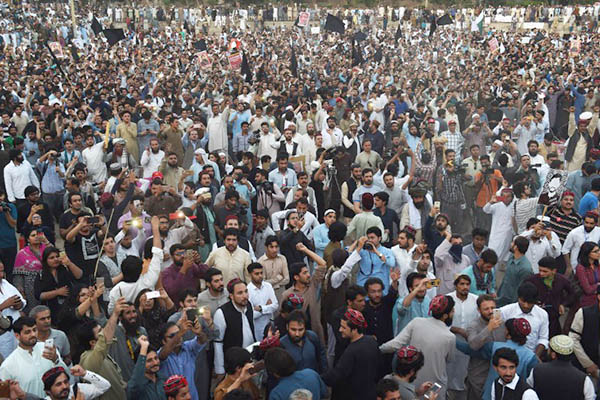 Supporters at 5,000-strong demonstration say they want a Pakistan for everyone, not just for the ‘generals and mullahs’

Thousands of Pashtuns defied authorities and held a mass rally in Lahore on Sunday, chanting anti-military slogans just hours after security forces cracked down on their leaders.

The rapidly growing Pashtun Tahaffuz Movement (PTM) has rattled Pakistan’s military since it burst onto the scene three months ago with a nationwide campaign against alleged abuses against ethnic Pashtuns by security forces. The Pashtuns are a fiercely independent ethnic group that straddle both sides of the border between Pakistan and Afghanistan.

Both the Afghan and Pakistani Taliban are dominated by Pashtuns, leading to repeated military operations in the region.

But PTM’s leadership claims Pashtun civilians have born the brunt of the Army’s long fight against militants and are calling for an end to what they say are rampant extrajudicial killings and “disappearances.”

Despite a far-reaching media blackout the movement has nonetheless drawn thousands of supporters, in one of the strongest challenges to Pakistan’s security establishment for years.

PTM leader Manzoor Pashteen on Sunday addressed supporters in Lahore, lashing out at the country’s top military brass over their alleged abuses and “dirty tactics.”

“They are thieves and they have only one goal in life, that is to make as much money as they can,” he claimed. An AFP reporter at the scene estimated about 5,000 people attended the rally—smaller than recent protests, but a significant showing considering Lahore lies far from the movement’s base in northwest Pakistan.

The crowd, which included non-Pashtun supporters, chanted slogans critical of the military during pauses in Pashteen’s speech, which he delivered in both Urdu and Pashto.

“We do not accept the Pakistan that is for the generals and the mullahs, we want a Pakistan for the Sindhis, for the Baloch, for the Pashtun and for the working class of Punjab,” said PTM supporter Fanoos Gujar, referring to the country’s major ethnic groups.

The protest went ahead despite authorities refusing to issue permits, citing security reasons. The rally was held hours after officials in Lahore detained several PTM leaders late Saturday following raids on Punjab University and a hotel. A local police officer confirmed the raids but said the activists have since been released.

The crackdown sparked anger on social media with the hashtags #ReleasePTMWorkers and #ShameOnPunjabPolice gaining traction.

PTM supporters from across the country had flocked to Lahore in recent days ahead of the rally. Following the raids, PTM leader Pashteen—who was not detained—vowed to continue with the demonstration. “We won’t stay silent. We will hold the rally at any cost,” said Pashteen in a message posted early Sunday.

The PTM came to prominence in February after the killing of a young social media star in Karachi unleashed festering anger at authorities over alleged targeting of Pashtuns.

Pakistan’s military has accused the PTM of colluding with India and overseeing a campaign to destabilize the country. Criticism of Pakistan’s armed forces, especially their counter-insurgency operations, is largely seen as a red line in the country.