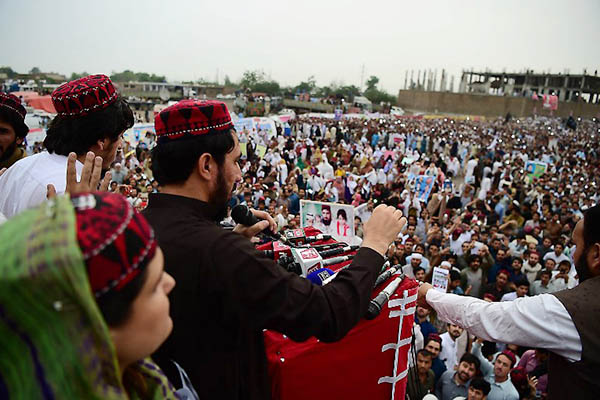 In a rare public challenge to Pakistan’s armed forces, thousands of Pashtuns rallied on Sunday in Peshawar to call for an end to abuses by police and troops.

The crowd chanted anti-military slogans as speakers took to the stage demanding an end to forced “disappearances” and harassment by authorities.

“I salute the Pakistan Army but if they are cruel I hate them,” said one female burqa-clad speaker to roars of applause.

Hundreds held posters or photos of missing family members and friends, whom they say have been seized by security forces during military operations against insurgents.

Speakers at the rally organized by the Pashtun Protection Movement demanded better treatment for ethnic Pashtuns, who make up an estimated 15 percent of the population and have largely borne the brunt of Pakistan’s war on terror.

Norab Jan’s two brothers and son were abducted three years ago. “We knocked at every door to get some knowledge but yet we have no clue where they are,” the 80-year-old said. “If they are alive or dead, we don’t know. We want them presented in a court of law. If they are guilty they should be punished, if not they should be released.”

A senior police official who spoke to AFP estimated about 30,000 people attended the rally in a field outside town. “We are not against anyone but this movement is against cruelty,” said its leader Manzoor Pashteen as heavy rain drenched the crowd. “We are against all cruelty, whether it is from the good Taliban or bad Taliban, or from peace committees, ISI [Inter Services Intelligence], MI [military intelligence] or the Army.”

According to organizers, at least 2,000 new cases of forced disappearances were registered during the rally.

The Pashtun Protection Movement rose to prominence after the killing of a young social media star in Karachi unleashed festering anger at extrajudicial murders and at the police accused of orchestrating them.

Hundreds of people die each year at the hands of law enforcement officers under pressure to crack down on kidnapping, murder and gang crime in a city routinely ranked among the most dangerous in the world. But the fatal shooting of 23-year-old Naqeebullah Mehsud, an aspiring model whose goofy dance videos and airbrushed brown locks had earned him a large Facebook following, brought thousands onto the streets to urge an end to impunity.

The country’s Pashtun belt in the northwest bordering Afghanistan has suffered from militant violence for over a decade as the Afghan war spilled over the border, leading to repeated military operations.