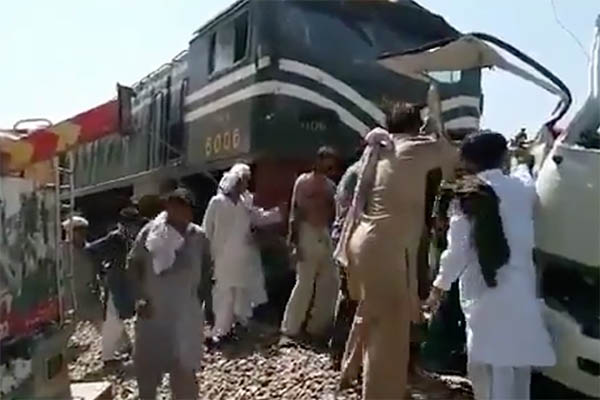 At least 19 members of Sikh minority killed, eight other passengers injured in collision

At least 19 members of the Sikh minority died on Friday after a passenger bus collided with the Shah Hussain Express train near Sheikhupura, according to rescue officials.

The officials said that 27 passengers were traveling in the van, including 25 members of the Sikh minority. The passengers had been traveling from Peshawar to Nankana Sahib in Punjab province to attend a funeral.

The officials said the driver of the coaster had tried to cross the rail tracks using a dirt path that doesn’t have any pickets instead of the road utilized by most motorists, resulting in the vehicle colliding with the Lahore-bound train near the Farooqabad railway station.

Railways officials told local media all the wounded had been shifted to hospital, adding that five of them appeared to be in critical condition.

Pakistan Sikh Gurdwara Prabandhak Committee Secretary General Sardar Amir Singh told Geo News that deceased had belonged to three or four families, who were all traveling to attend the funeral. He clarified none of them were pilgrims.

Following the crash, Railways Minister Sheikh Rashid Ahmed ordered an inquiry and vowed strict action against anyone found responsible for the incident.

Prime Minister Imran Khan issued a statement expressing grief over the loss of lives in the accident and directed authorities to provide best medical treatment to the wounded.

President Arif Alvi has also issued a statement expressing sorrow over the loss of lives in the incident.

Train accidents in Pakistan have increased in frequency in recent years, with one of the worst occurring in October 2019. The Tezgam Express tragedy resulted in 73 deaths and more than 40 injuries after the train caught fire near Rahim Yar Khan. According to daily Dawn, more than 100 train-related incidents occurred in 2019 alone, with several resulting in fatalities.