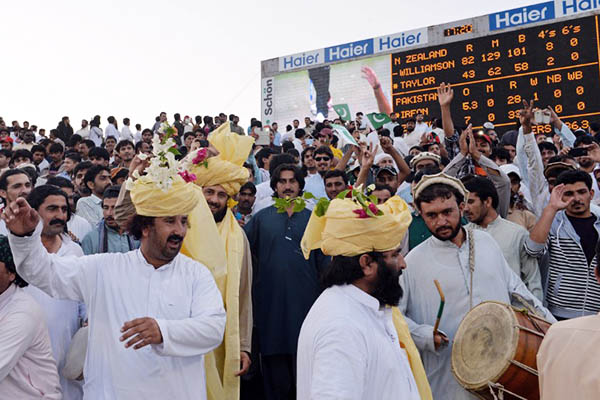 Taxi-driving expats in the U.A.E. say cricket is the only entertainment for them.

For 59-year-old taxi driver Kamal Khan, cricket is war without the shooting. Like most Pathans, known for their tough, battle-hardened nature, defeat is unacceptable. They may not know all the rules of the game, like the Barmy Army fans of England or India’s Swami Army but Pathans watch cricket out of passion for the sport and for the love of Pakistan.

Kamal, like most of his fellow Pathans, often skips his taxi-driving duties to watch cricket in the United Arab Emirates, the neutral venue where Pakistan have been forced to play since 2009’s terror attacks on the visiting Sri Lanka team back home. A 30-dirham ticket ($8) gives fans a comfortable seat in the stands or a place on the mound and the rest is enjoyment.

“Cricket is the only entertainment for us in this country,” said Kamal, who has been driving a cab in Abu Dhabi for 13 years.

The 9/11 attacks on the United States, and the ensuing war in Afghanistan and around Pakistan’s Khyber-Pakhtunkhwa province, forced hundreds of Pathans to move to the Gulf in search of a more lucrative and peaceful way of life. A taxi driver like Kamal earns 4,000 dirhams to 7,000 dirhams a month but the 24/7 job takes its toll.

“Most of the taxi drivers have kidney stones because they don’t drink much water to avoid going to the toilet,” said Kamal. “Life is tough and there was no enjoyment but since cricket arrived here we are very happy that we can watch our players.”

Needless to say, the Pathans demand aggression and passion on the field. They come in large numbers to watch sixes and boundaries in a Twenty20 or a one-day international. And that is the reason that star all-rounder Shahid Afridi, who hails from the Khyber Agency, is the star attraction even after 18 years in the game.

“We just come to watch Afridi,” said Taif Khan, who drives a taxi in Sharjah. “I got my money’s worth when I watched the third one-dayer [against New Zealand] last Friday because Afridi got a fifty.”

“Our cricket begins and ends with Afridi,” said Wahid Khan, a trader from Miranshah in North Waziristan. “I lost millions in the recent operation in Miranshah,” said Wahid, referring to the military operations by the Pakistan Army aimed at clearing the area of militants. Those military sweeps resulted in his shops being razed.

Wahid now lives in Abu Dhabi and finds solace in cricket. “Cricket is a way of forgetting our pains,” he said. “By default we are watching our players here and it’s great entertainment.”

Afridi acknowledges the support he receives. “They love me very much,” admitted the 34-year-old Afridi. “Most of them drive taxis and whenever I get time I meet them. It’s their love and affection that drives me. It is good that we provide them with some amazement in an otherwise labored life.”