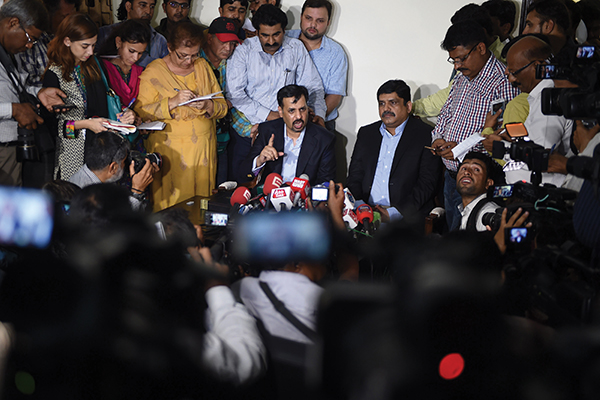 Back home from self-exile, Mustafa Kamal, the Muttahida Qaumi Movement’s ex-mayor of Karachi, held a fiery press conference on March 3. He excoriated his former party, extolled the Army, and demanded a radical revamp of Pakistan’s Constitution. The Rangers, who have effective control of Karachi, are central to his return. The Rangers have cut the MQM down to size and restored some semblance of order in chaotic Karachi. Like Kamal, they too have excoriated his former party, extolled themselves, and directly and indirectly demanded a radical revamp of Pakistan’s Constitution. These shared positions have led many to conclude that there’s more to Kamal’s arrival than meets the eye. Four days later, the Rangers asked the Supreme Court for formal policing powers across Sindh province. The Sindh Police correctly pointed out that the establishment of such a parallel law and justice system is not constitutional. The following day, the court rubbished the police’s defense against the Rangers’ claims and allegations and directed the provincial government to work with the Rangers to resolve the force’s “misgivings.” The public has started becoming skeptical of what is increasingly looking like an unvarnished power grab. But on the bright side, given Pakistan’s history, at least they’re asking this time around?

Not asking only but playing a very positive role. The Army not restored order in Karachi and other parts of countrybut are fighting seriously and effectively against all types of terrorism. Above all they are treading slowly lest Altaf won’t become another Mujib.

This article has tried to establish a link between emergence of a new political force and clean-up action by a law enforcement agency. What it has missed out is the linkage with recent successful cleansing of criminality from Karachi. A follow-up justifies requirement of an improved political order and revamping of ineffective policing system. Karaci has to go peaceful. Its the jugular vein of Pakistan. Security is the first fundamental step in that direction. However is beyound the capacity of its current Police force. Karachi Police has been politicized; it has infiltrated by criminal elements and is corrupt to the core. Solution: Karachi Police should be disbanded and Rangers should fill the interim vaccum while a new competent Police Force should be raised.