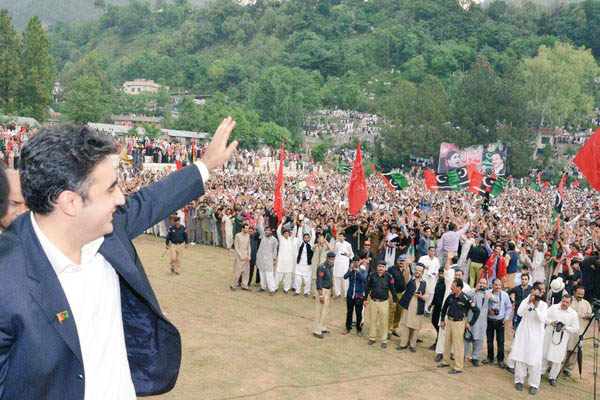 Bilawal Bhutto Zardari’s fiery speech at Bagh in Pakistan-administered Kashmir, which is in the midst of an election campaign, was the political highlight of Tuesday and reaffirmed the radical change in the policy of the Pakistan Peoples Party toward Prime Minister Nawaz Sharif.

The “friendly opposition” policy of his father, former president Asif Ali Zardari, has gone. The young Zardari, chairman of the PPP, resorted to familiar opposition rhetoric when he challenged Sharif for being a “friend” of his Indian counterpart, Narendra Modi. Clearly, the PPP chairman was communicating—over Sharif’s head, directly to the Army—that he understood who was calling the shots in Karachi, where the PPP is governing.

Sharif’s party said the young politician’s speech was crude, “immature,” pandering, and out of sync with the PPP’s own experiences. President Zardari was subjected to harassment by the powers-that-be until he took ill and had to leave Pakistan temporarily during the Memogate paroxysm. He faced a treason allegation at the Supreme Court, where the Army and Sharif seemed to be in lockstep in trying to topple him or debilitate him ahead of the 2013 elections.

The assumption behind the PPP chairman’s Pavlovian retreat into old patterns is that the Army and Sharif’s government are engaged in a power contest. Pakistan Tehreek-e-Insaf’s Imran Khan thought so too in 2014, when he put his party on the line by staging a sit-in that failed to trigger Sharif’s dethronement. Back then it may not have been so obvious, but in 2016 it doesn’t look as if the Army is keen to either topple Sharif or let the PPP government off the hook in Sindh.