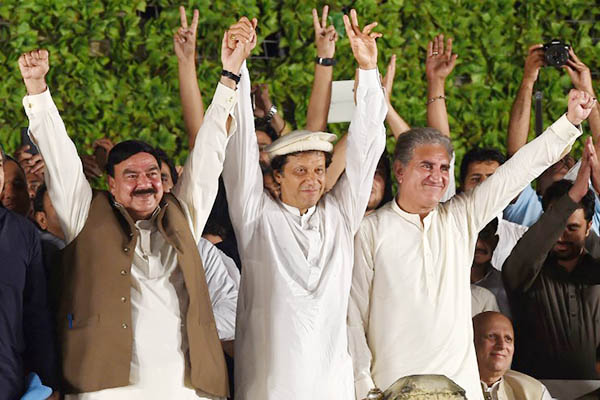 The PTI is selling vengeance ahead of the next general elections

Imran Khan, addressing a large crowd in Okara, near the Pakistan Muslim League (Nawaz) bailiwick of Lahore, was predictably upbeat and reckless with defamatory “revelations” and threats to the Sharifs and their party loyalists. He reiterated claims that the “Sharifs had been buying judges like Justice Qayyum” and—ignoring a defamation case filed against him by Shahbaz Sharif—“Shahbaz Sharif carried boxes filled with currency to Quetta to buy judges against Justice Sajjad Ali Shah.” He repeated the threat that after coming to power he would punish Law Minister Rana Sanaullah “who looks like a robber” and Railways Minister Khawaja Saad Rafiq for becoming a “billionaire through prize bonds.”

Khan has also been threatening punitive action against civil servants after coming to power, including the chairman of the National Accountability Bureau (NAB) and the deputy commissioner Sheikhupura, who must be quaking in his boots over the strength of Khan’s rallies in northern Punjab. The Pakistan Tehreek-e-Insaf (PTI) party has shown some muscle in the south and attracts the new middle class in the north too. People question his claims of improved governance in the Khyber-Pakhtunkhwa under the PTI’s rule, but with the ruling party in dire straits in Punjab, Khan’s vote-bank has nowhere to go but up. Buoyed by an acquittal at the Supreme Court, Khan is now clearly relying on politics of intimidation as he once again seeks to assume the premiership he feels has been denied him far too long.

Tragically, if threats prove true and Khan embarks on a policy of punitive accountability, it will prove disastrous for Pakistan, which has gone through such “purges” in the past. The big “cleansing” operations under Ayub Khan and Zulfikar Ali Bhutto shook the economy and delayed “normalization” of the state. General Musharraf went after capitalists he believed were in cahoots with the Sharifs, but soon realized he was damaging the economy and eased the pressure.

Globally, the purges of the Soviet Union and Communist China are black spots in history; and in Pakistan any such campaign would be ominous for the economy. What is required instead is the resuscitation of the institutions damaged by the coercion of power. The capitalist class will reform itself in no time. The bigger question, especially in light of the recent disqualification of PTI secretary-general Jahangir Tareen, is: Will Khan instruct instead his “electables” of past ill-repute to reform themselves before running the affairs of the state?