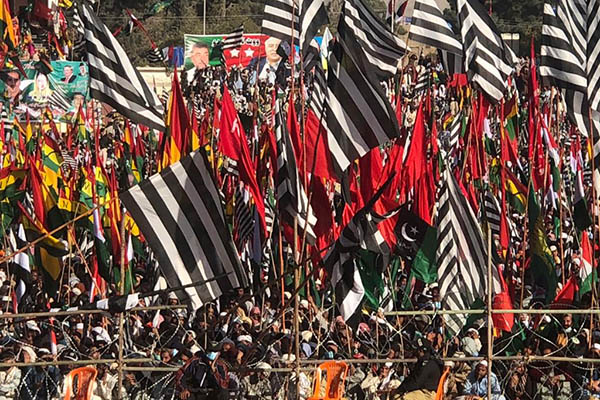 The united opposition’s Pakistan Democratic Movement (PDM), in its latest “power show” against the Pakistan Tehreek-e-Insaf, on Sunday staged its third anti-government rally in Quetta, reiterating their resolve to continue their demonstrations until Prime Minister Imran Khan has been ousted from power.

Addressing the gathering in the Balochistan capital’s Ayub Stadium, Pakistan Muslim League (Nawaz) chief Nawaz Sharif slammed the security establishment, calling on the sitting Army chief and spy agency ISI head to “answer for their actions.” He claimed that he would not stop naming and shaming senior officers who were acting beyond their constitutional ambits and stressed that he had no issues with the military’s rank and file.

“I see from the crowds today that our narrative of ‘vote ko izzat do’ (respect the vote) is gaining strength,” the former prime minister said in his address, which was delivered via video-link from London. Referring to the lack of development in Balochistan as a “tragedy,” he questioned how long people would continue “disappearing.” He also hit out at rampant inflation, claiming misgovernance had left people having to choose between medicine, food and their children’s education.

Claiming he had not been liked by “them”—a seeming reference to the security establishment—because he did not submit to “dictation,” Sharif alleged a plan had been concocted to oust him from power. Slamming alleged electoral rigging in the 2018 general elections, he also condemned the ‘Karachi incident,’ in which Sindh’s top cop had been “abducted” and forced to issue arrest orders for PMLN leader Mohammad Safdar.“This proves there is a state above the state in Pakistan,” he said, claiming it was actions like this that tainted the image of the country’s armed forces.

Reiterating that the armed forces were not complicit with rigging as an institution, Sharif said this was why he identified specific individuals. “You promised not to interfere in elections,” he said, and questioned how the Faizabad dharna by the Tehreek-e-Labaik Pakistan was not a “charge sheet” against the spy chief. “You have betrayed your oath,” he claimed, adding that if this much attention had been paid to the issue of Kashmir, India would never have been able to unilaterally end its special constitutional status.

“This is your land,” Sharif told the country’s soldiers. “But this land and its people are harmed if the Constitution is violated,” he said. Similarly, he urged the country’s civil bureaucracy to not act on illegal orders. “Look to the Sindh Police,” he said of their tendering mass leave requests in protest. “All civil servants should be able to perform their duties without fear of intimidation,” he added.

The PMLN Vice-President commenced her address by condemning caricatures of Islam’s Prophet being projected onto government buildings in France, saying this had hurt the sentiments of Pakistanis and Muslims. She also raised the plight of Baloch students, whose scholarships and admission quotas were recently slashed by the Punjab government. “The students of Balochistan and Punjab are both equally close to my heart,” she said, adding that the people of the province had a right to elect their own representatives.

The opposition leader also highlighted the issue of missing persons, narrating the story of a young girl who had lost three brothers without any knowledge of their current whereabouts. “I did not cry when I was arrested … but I cried after hearing her story,” she said.

Maryam also slammed the manner in which her husband had been arrested in Karachi, questioning if Pakistan’s norms permitted strange men from barging into the private room of a woman.

Claiming that the teachings of Pakistan’s founder, Quaid-e-Azam Mohammad Ali Jinnah were being erased, she criticized the installation of a “fake government.” Balochistan is in the state it is in today because the people’s mandate has not been respected, she said. “[Pakistan’s] freedom and existence will be in jeopardy if we do not stop this today,” she added.

The PPP chairman was the second leader of the 11-party PDM to address the gathering remotely, via video-link from Shigar, Gilgit-Baltistan. He said that despite what was being claimed by government ministers, the PPP would not abandon the PDM. “We can move two steps forward, but we will not step back,” he said.

Slamming the rights abuses suffered by the people of Balochistan for decades, he said that people—whether from Karachi, Gujranwala, or Quetta—all want freedom and the rule of democracy. “What sort of freedom is this that neither are the people free, nor is there is a free democracy,” he said, adding that even when the PDM leaders were separate by distance, they were united on their demands.

Addressing the specter of military rule in Pakistan, Bhutto-Zardari claimed that Musharraf’s ouster had resulted in successive governments “condoning the tyranny of dictators.”

Alleging that Prime Minister Imran Khan had not “given anything to Balochistan,” Bhutto-Zardari claimed the federal government was now trying to take control of islands that were provincial domain. “PDM will not allow Imran Khan to take over the islands of Balochistan and Sindh,” he said, adding that it was Khan, in fact, who was trying to have CPEC fail. “Imran Khan has destroyed the country’s economy. This is destruction, not change,” he said of the PTI’s “tabdeeli” slogan.

The PPP leader echoed other leaders in demanding an end to “disappearances.” He said if this cruelty continued, the country would reach a breaking point.

“Can you find an example like this in any other country? People disappear from every city and province,” he said, and also called out the National Accountability Bureau (NAB), claiming more people had died in its custody than at the Guantanamo Bay prison run by the U.S.

He claimed the prime minister wanted to turn every institution of the country into pliant members of his Tiger Force and also criticized the Balochistan government banning lawmaker Mohsin Dawar from entering Quetta.

The PDM’s chief convener wrapped up the rally with an address that also commenced with condemnations of Islamophobic actions by France. Stressing that the people of Pakistan were peaceful, he warned: “When such unholy actions are made, remember that there will be a reaction.”

Discussing the ‘Karachi’ incident, he termed it “moral bankruptcy” and drew equivalence between the PTI considering the shouting of slogans at Quaid-e-Azam’s mausoleum a serious crime while allowing a music video to be shot inside the historic Wazir Khan Mosque.

The JUIF chief said that the incumbent government should resign after the Supreme Court’s decision on a presidential reference against Justice Qazi Faez Isa. “The apex court’s judgment is a clear vindication of PDM’s stance,” he claimed.

Rehman said the incumbent government’s foreign policy had frayed ties with Pakistan’s strongest allies—China and Saudi Arabia—and claimed even Afghanistan had distanced itself. “They [PTI] do not have a foreign policy and are not even aware of what it is,” he said. Referring to Kashmir, he reiterated his claim that a “deal” had been made that had “sold” India-held Kashmir to Delhi.

The JUIF chief, like Sharif before him, stressed that the PDM respected all the country’s institutions. “We are not the enemy,” he said, adding that the government was panicking and trying to find a dignified exit.

“Our movement against these fake rulers will gain momentum,” he warned, and accused P.M. Khan’s government of destroying the country’s economy. “This journey has started and it will continue … If you wish to rid yourselves of oppression, then have the courage and move forward,” he said, claiming this would lead to a “better Pakistan.”

The rally was also addressed by leaders of the Qaumi Watan Party, and the Awami National Party, who all demanded the PTI government step down and free and fair elections be organized for a “people’s government.”