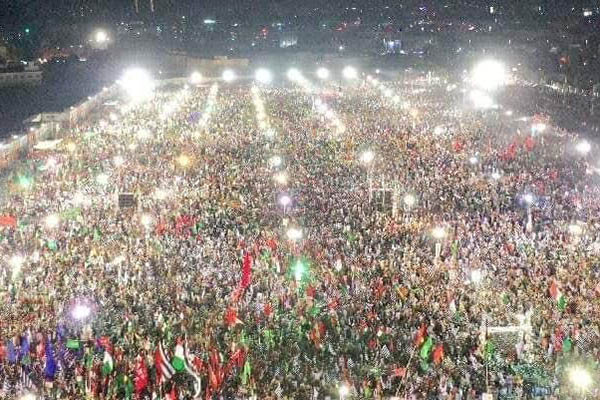 Two days after its inaugural rally in Gujranwala, the 11-party Pakistan Democratic Movement (PDM) continued its campaign to oust the incumbent government with a demonstration in Karachi that coincided with the anniversary of the 2007 Karsaz bombing.

Tens of thousands gathered at the Bagh-e-Jinnah in the shadow of Quaid’s mausoleum, with opposition leaders rubbishing threats and warnings from government ministers, including Prime Minister Imran Khan, to cease the movement or risk legal action.

Responding to a jibe from the prime minister in which he had referred to her as a ‘grandmother’ in an insulting tone, Maryam said it was curious how “troubled” the premier was after just one rally. Comparing his response to that of her father, ousted prime minister Nawaz Sharif, she noted that despite a 126-day sit-in, the PMLN chief had never even mentioned Khan.

“In a fight among elders, there is no room for children,” she said, referencing Khan’s claims that he would not comment on statements of “children” Maryam and Bilawal. “The world knows that you have taken over NAB, FIA, FBR, SECP,” she claimed and urged him to explain how unemployment had soared even as the government raised the prices of medicines and was unable to curb inflation.

To another comment of Khan’s about her and Bilawal having never “worked a single day in their lives,” Maryam said any person “who spent his life living off his rich friends’ money should not make such comments.” Referring to his Panah Gah (shelter home) initiative, Maryam said it was unfortunate that people who had lost their homes due to the economic policies introduced by Khan’s government were forced to seek shelter.

The PMLN vice-president said that she did not like to respond to the premier’s insults as they were “below my dignity,” but said she felt she had to respond to Khan’s seemingly using the word ‘grandmother’ to insult her.

“Nani [maternal grandmother] is the mother of a mother; you have disrespected this wonderful, beautiful relation,” she said, adding that despite political differences, she had never been insulted by members of rival parties other than the PTI. “Today, we are fighting for the rights of the Pakistani people, and when we will compete with each other in the political battleground then we will become competitors, but we won’t become each other’s enemies,” she said.

Addressing PPP’s Bilawal directly, she said his mother (Benazir Bhutto) and her father (Nawaz Sharif) had become like siblings after signing the Charter of Democracy. “Bilawal and I are continuing to honor that relationship,” she said and urged him to join her in promising that no matter their political differences, they would never resort to personal attacks as had been visible in the past.

Claiming Khan’s interest was not in the people, but rather the opposition, Maryam pointed out that instead of giving speeches on inflation or economic concerns, he had chosen to slam the PDM.

Referring to Khan’s repeated assertions that the PDM was comprised only of “corrupt” people, Maryam questioned the cost of the Peshawar BRT “which has buses that keep catching on fire.” She also slammed the “billion tree tsunami,” which is facing a probe and criticized how under his government disrespecting women and destroying the economy had become “accomplishments.”

The PMLN vice-president also questioned why Opposition leaders were branded ‘traitors’ when they criticized the government’s policies, but the PTI’s foreign funding case continued to fester in courts with no resolution. She slammed Khan’s “hopes” prior to the Indian general elections for Narendra Modi to be re-elected prime minister, noting that it was odd he would go after the opposition for “speaking Modi’s language.”

Praising her father, Maryam said Nawaz Sharif had “fought” the case of Kashmiri freedom fighter Burhan Wani. “Nawaz Sharif built motorways, he promoted democracy, led two wars against terrorism,” she said and dared the government to “ban” the PMLN, as has been hinted by some ministers.

“PMLN is not just a party, it is the spokesperson and the identity of millions of people,” she said, adding that the PDM would not rest until it had rid the public of the incumbent’s “darkness of incompetence.”

PPP Chairman Bilawal Bhutto-Zardari, also the host of the Karachi rally, said the PDM wanted Pakistan to achieve “true democracy.” He said this must fully reflect the will of the people. “Remember this: The people will no longer remain silent. The walls of their [government] homes will shake with the chants of the people,” he said, adding that the PDM represented workers, farmers, lady health workers, government employees and every suffering section of the country.

“The prime minister has to go; this movement is against hunger, injustice and oppression,” he said and slammed the Punjab government, led by the PTI, as a “joke.” He also hit out at the federal government for attempting to rob Sindh of its rights by reducing the NFC Award and trying to take over islands under its control.

“A conspiracy to separate Karachi is brewing,” he said, adding the Rs. 1,000 billion package for Karachi was a “scam.” He said that the PDM’s fight is not to gain power, as has been alleged by some in the government. “Whenever there is an attack on democracy, people are crushed under the weight of such injustice,” he said. “The poor people go hungry, people’s lives become unsafe, the air becomes unbreathable. The freedom to speak, to breathe, to live a life of dignity and freedom from poverty—democracy is the answer to all of this,” he said.

The PPP chairman said Pakistan had reached an important crossroads. “We have to fight for the supremacy of the Constitution and for democracy and this fight has to be fought by the people,” he said, adding that all those institutions—the judiciary, media—that could safeguard peoples’ rights were “being hollowed out.”

Paying tribute to his late mother Benazir Bhutto and all those who had been killed in the Karsaz attack 13 years ago, Bilawal said the pain and sorrow caused that day would remain a lifetime. He said that his mother had visited hospital and comforted the injured shortly after the attack. “Benazir never feared anything, never left the side of the people,” he said.

JUIF chief Maulana Fazlur Rehman concluded the rally with a wide-ranging speech in which he reiterated the PDM’s core aims to establish a “free, democratic atmosphere” and ensure the survival of the state. “No [constitutional] amendments will be accepted that would reduce the rights of the people,” he said of PTI lawmakers’ desires to amend the 18th Amendment. “If the people of Sindh do not want, no one can dare to divide Sindh,” he said, adding that he had never recognized the incumbent government as legitimate.

Claiming to have been threatened and cajoled to stay away from the PDM, he said that his response had always been that he would never accept this “puppet government.” He said that the Constitution of Pakistan was a social contract that protected the rights of every citizen, and defined the jobs of every institution. “If we follow the Constitution it would lead to genuine leadership fizzling out puppet leaderships and despite all hardships, the challenges could be overcome,” he said.

In a direct jibe to Chief of Army Staff Gen. Qamar Javed Bajwa, Rehman said: “Bajwa sahib, I respect you very much. But please try to avoid these foolish [P.M. Imran Khan] friends. They are putting blame on you.” He also called out the prime minister for “selling” Kashmir, claiming the disputed territory’s new status quo had been achieved through a “compromise.” He claimed the PTI government had backed out from Pakistan’s historic stand on Kashmir.

In his speech, Dawar reiterated Nawaz Sharif’s calls for a ‘Truth Commission’ to probe all allegations against political leaders and military leaders past and present accused of violating the Constitution. He said this would not only help the democratic process, but would put to rest once and for all who had cheated democracy for personal gains.