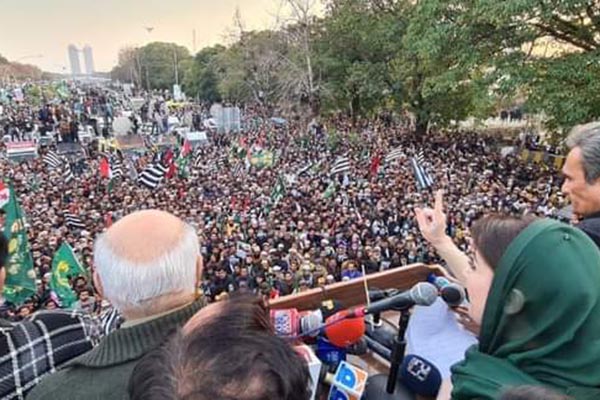 Supporters of the parties comprising the opposition’s Pakistan Democratic Movement (PDM) alliance on Tuesday converged at the Election Commission of Pakistan (ECP)’s office in Islamabad, demanding it conclude a long-pending foreign funding case against the incumbent Pakistan Tehreek-e-Insaf (PTI).

The protest was marred by Pakistan Peoples Party Chairman Bilawal Bhutto-Zardari opting to skip it to “celebrate” his party’s win in the Umerkot by-polls. PTI spokespersons have alleged that this “proves” rifts within the PDM, and have claimed the PPP is playing a “double game.” To a question, Awami National Party’s Mian Iftikhar Hussain said each politician aligned with the PDM was free to act of their own accord, and the PPP was being represented by senior leaders at the protest.

Addressing the rally for the PPP, former prime minister Raja Pervaiz Ashraf said Prime Minister Imran Khan should be declared ineligible for office and the foreign funding case should be conclusively decided as soon as possible. He also led the rally with chants of “Go Imran Go.”

PDM President Maulana Fazlur Rehman, meanwhile, congratulated the few thousand participants for showing the government a taste of what they would have to face if “all of Pakistan comes out for a long march on Islamabad.” He recalled that his party had protested against the results of the 2018 general elections shortly after the polls and demanded fresh, free and fair, elections. “However, some [people] pressured the ECP and imposed a man on the country who doesn’t have the intellect for politics or governance,” he said, claiming the only purpose of “installing” Khan was for “institutions” to run the government while Khan served as their front-man.

He questioned why the PTI was so eager to conclude cases against rivals, but had been dragging out the foreign funding for over six years. “They have lied [to you]. They are hiding their funds,” he claimed. To demands from the incumbent government to not “malign state institutions,” the PDM president jokingly questioned what he should call the people who had installed Khan as the prime minister.

“These ‘institutions’ [who imposed Khan] have brought us to a point where even our allies are no longer considering us friends,” he claimed, referring to Saudi Arabia and China, as supporters shouted slogans accusing Khan of being a “Jewish agent.”

Concluding his speech, Rehman urged his supporters to once again take to the streets on Feb. 5 in solidarity with Kashmiris. “We will stage a massive rally in Rawalpindi on that date in support of Kashmiris against [this government] selling their rights to the government of Narendra Modi,” he said. “We will prove to the people of Kashmir that we stand with them,” he added.

To comments of Interior Minister Sheikh Rashid Ahmed that madrassa students should “not be dragged on the streets,” Rehman said they were full citizens of Pakistan with equal rights. “They have a right to protest if they wish,” he said, adding, “Why are you scared of madrassas?”

Pakistan Muslim League (Nawaz) Vice President Maryam Nawaz lamented that Pakistan had no accountability or justice. “We have gathered in front of the ECP today to remind it of its constitutional responsibilities,” she said, adding that the institution was tasked with ensuring people’s mandate was protected. “Did this institution protect the people’s mandate [in the 2018 polls]?” she asked the rally’s participants to a resounding “No.”

Narrating the history of the foreign funding case, she alleged that the scrutiny committee probing the PTI’s alleged malfeasance had been “told” to “go easy” on Imran Khan and his party. “Imran Khan tried to get the probe halted at least 24 times,” she alleged, adding that the PTI had also submitted four requests for the proceedings to be kept secret. “If you have nothing to hide, why have you demanded that the proceedings not be made public?” she said, claiming that this “proved” that “massive looting” had been done.

Alleging that the State Bank of Pakistan had found 23 “secret” bank accounts of Khan, she claimed all of them were being directly managed by the incumbent prime minister. “The scrutiny committee admits it cannot provide all the case information to the public because Imran Khan has said it should not be shared,” she claimed, adding that Israel and India were the two countries from which the amount of funds had been sent to the PTI.

“A worker of the Bharatiya Janata Party, Inder Dosanjh, sent funding for the PTI from India,” she alleged, adding that one Barry C. Schneps from Israel had also done the same. “There are many others from these countries who have sent money to the PTI,” she claimed, adding that this funding explained why Khan had wanted Narendra Modi to be re-elected prime minister of India in 2019.

The PMLN leader also derided the PTI’s stated defense of the foreign funds having been secured through “agents” without any knowledge of Imran Khan. “Did you not know where this money was coming from when you were using it?” she said, adding that it took seven years for the party to recall that the source of the funds was only known to “agents” and not the party chief. She also accused the ECP of being complicit in imposing the “selected” on the people of Pakistan at the behest of the “selectors.”

Ahead of the protest, the PDM’s leadership met at the residence of Rehman to review their strategy. After the meeting, the JUIF leader reiterated that the protesters were merely demonstrating against the long delays in resolving a case of the PTI being allegedly funded by the “enemies” of Pakistan. “We will place the matter before the court of public opinion and question why the issue is not being resolved,” he said.

The government had heightened security around the ECP building ahead of the protest, with Interior Minister Sheikh Rashid Ahmed claiming that both Rawalpindi and Islamabad were under “high alert” due to security threats. According to local media, the federal government deployed two platoons of the Punjab Rangers, along with police personnel, to block access to the ECP building. Walkthrough gates were also installed in the Red Zone for pedestrians.

Ahmed also announced that he would personally oversee a “control room” established at his ministry to monitor the law and order situation in the federal capital during the opposition’s rally.

On Monday, the PDM president had announced that the PTI foreign funding case had been pending for six years and the public could not tolerate any more delays in its resolution. “Decisions against elected prime ministers are given within six months, but a verdict against a selected prime minister has been pending for over six years,” he said, referring to Nawaz Sharif and Imran Khan, respectively.

Terming the foreign funding case the “biggest scandal” in Pakistan right now, he alleged that P.M. Khan had amassed millions in unexplained wealth in the name of party funds. He also alleged that Khan had used funds gathered for charity for personal business.

The foreign funding case against PTI was filed in November 2014 by Akbar S. Babar, one of the party’s founding members. He had alleged serious financial irregularities in PTI’s accounts, including illegal sources of funding, concealment of bank accounts, money laundering, and using private bank accounts of PTI workers as a front to receive illegal donations from the Middle East.

The ECP is set to resume hearings into the funding case on Wednesday.

After the rally’s conclusion, the interior minister claimed that only around 3,000 people could be gathered by the 11 parties and termed it a “gathering of people who are hungry for power.” He claimed that the government had nothing to fear from the PDM, and urged them to commence their long march now if this crowd reflected the numbers they could attract.