PDM Lawmakers to Submit Resignations to Party Leaders by Dec. 31 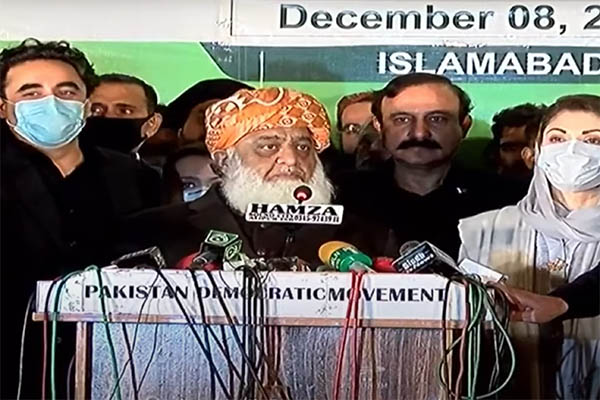 The united opposition’s Pakistan Democratic Movement (PDM) on Tuesday announced that lawmakers of its component parties would submit their individual resignations to their party leaders by Dec. 31, adding that a date for their submission to Parliament would be announced later.

Addressing a press conference after a meeting of the PDM leadership in Islamabad, the alliance’s president Maulana Fazlur Rehman said a steering committee would meet today (Wednesday) to “decide the schedule for further rallies and demonstrations and the date for long march towards Islamabad.” He did not specify any date for submission of the resignations to the respective speakers of the national and provincial assemblies.

He said the steering committee meeting would also deliberate on calling for nationwide shutter-down and wheel-jam strikes.

Commenting on Prime Minister Imran Khan’s repeated assertions that he would be willing to engage the opposition on all issues except for corruption cases, Rehman claimed Khan was in fact seeking a NRO [reconciliation deal]. “We reject his offer. He is not worthy of dialogue,” he said. He also claimed that, unlike the ruling Pakistan Tehreek-e-Insaf—which had withdrawn its resignations in 2014—PDM lawmakers would not withdraw their resignations once they had submitted them.

In his press conference, Rehman said all the participants were unanimous in ensuring the rally in Lahore would proceed at Minar-e-Pakistan on Dec. 13. He warned that if the government tried to create any hurdles, it would face the same fate as it had in Multan. “The Lahore rally will be historic and it will be the final nail [in the coffin] of the government,” he claimed.