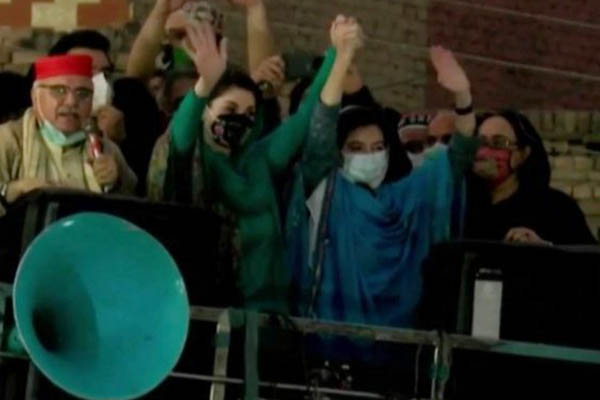 Thousands converged in Multan on Monday as part of the united opposition’s latest “power show,” with Pakistan Democratic Movement (PDM) President Maulana Fazlur Rehman vowing that the next rally in Lahore [on Dec. 13] would be the “final nail in the PTI’s coffin.”

Rehman told the gathered masses that they had “scared” the incumbent government, claiming the PTI had tried to stop the Multan rally from proceeding but had backed down when they saw the strength of the opposition. “We will succeed in your ouster [from government] the same way we have sent you running from Multan,” he said, adding that the opposition would protest nationwide against the arrests and violence police had perpetrated against PDM workers ahead of the Multan rally.

Warning that the Lahore rally would be followed by a march on Islamabad, Rehman said the PDM was fighting for the Muslim ummah and the country. “We will not rest until we have ousted you [Imran Khan] from the government,” he said, urging the public to unite with the opposition in ensuring the downfall of the PTI-led government.

The Jamiat Ulema-e-Islam (Fazl) chief said that after “abandoning” Kashmir to India, the Imran Khan-led government now wanted to do the same with Palestine. “We will not let this happen,” he said.

“We owe a debt to the nation that we must repay,” he said, referring to the people’s mandate. “Their vote was stolen. We must not let this happen again,” he said, adding that the opposition had thus far been very restrained. “We can do a lot more,” he warned. “Do not take our restraint as weakness.”

Maryam Nawaz, Aseefa Bhutto-Zardari, and Maulana Fazlur Rehman—representing the three largest parties of the PDM—gathered atop a container, as the government’s restrictions prevented them from erecting any proper stage or sound system, as is regular practice for such public gatherings. The rally also lacked any proper lighting, prompting the organizers to urge their supporters to turn on their mobile phone flashlights so the gathering could continue.

Maryam commenced her address by praising the ‘bravery’ of the people of Multan for coming out to participate in the rally despite the government’s attempts to ban it. She also thanked the participants for giving her such a massive welcome, and for staging the PDM’s rally in every street of the Punjab city.

“You have defeated Imran Khan today,” she said to cheers from the crowd. Congratulating the PPP on their Founders’ Day, she also welcomed Aseefa Bhutto-Zardari to the stage, noting “when their country is in trouble, Pakistan’s daughters must come out to register their protest.” She lamented that the government had tried to politicize the death of her grandmother, and slammed the government for using the tragedy to target the PMLN. To the government’s continued attempts to force Nawaz Sharif to return to Pakistan, she questioned if any court had the courage to bring Gen. (retd.) Pervez Musharraf back to the country to respond to his treason case.

The PMLN vice-president said the opposition knew the public’s woes had climbed due to inflation, and unemployment. She criticized the government for continuing to host political events while urging the opposition to halt its public gatherings. “It is a very smart virus,” she said sarcastically. “It only enters PDM rallies; not government events,” she said, adding that it was curious that it also seemed to only target groups more than 300. “It is more important to send COVID-18—Imran Khan—home before we focus on COVID-19,” she said.

Maryam criticized the government’s handling of the economy and rule of law, questioning the ‘virus’ that was preventing it from fixing the issues it had claimed to identify in those sectors. “This is the same Imran Khan that had promised you ‘south Punjab,’” she said. “Has this promise been fulfilled?”

Calling on the gathered crowd to promise not to fall for false promises in future, she said politicians that kept switching parties should also be rejected at the polls. “Two selectors keep trying to make this bus [Imran Khan] work, but it still keeps stalling,” she said and mocked the prime minister for being declared ‘honest’ despite being complicit in several cases of alleged corruption.

Reiterating her criticism of Lt. Gen. (retd.) Asim Saleem Bajwa and his “pizza scandal,” Maryam questioned why Khan had not initially accepted his resignation. She also raised questions about the parties behind recent calls for Pakistan to recognize Israel, wondering if the “selected” and “selector” were on the same page on the issue. “When the foreign funding case finally reaches a conclusion, the public will learn who is behind this move,” she said, as she announced that the PDM’s anti-government protests had reached their final phase. “I am ready for jail if that is the price to be paid for demanding the rights of the public,” she added.

Taking the podium, Aseefa Bhutto-Zardari congratulated the participants for helping make the PPP Founders’ Day and the PDM rally a success “despite the difficulties inflicted upon you by the ‘selected’ government.” She said PPP founder Zulfikar Ali Bhutto had launched his party for democratic rule; a flag that had then been taken up former prime minister Benazir Bhutto. “PPP workers have been martyred … I pay respects to all those who are not here today,” she said.

Noting that she was attending the demonstration in place of her brother—who is currently in isolation after having tested positive for COVID-19—she promised that she stood with the public and her brother in every step of the PDM’s fight for civilian supremacy. “If they think they can scare us with arrests, they are mistaken,” she said, adding that every woman of the PPP was ready to take to the streets if needed. “We will fulfill the mission of Benazir Bhutto and save this nation from this ‘selected’ government,” she said.

The rally started off a bit later than scheduled, as the government had placed containers on major arteries to block large crowds from gathering, ostensibly in a bid to curb the spread of the novel coronavirus. After being denied permission from staging the public gathering at the Qasim Bagh Stadium, leaders of the PDM converged on Ghanta Ghar (Clocktower) Chowk, with three separate crowds representing the PPP, the PMLN and JUIF uniting there as a singular group.

Despite earlier trying to prevent the rally through mass arrests of PDM leaders—including former prime minister Yousaf Raza Gilani’s son Kasim Qilani—the government backed down on Monday, with Punjab police saying no one would be prevented from converging on the Ghanta Ghar Chowk. Courts also ordered the immediate release of all detained activists, allowing Kasim to attend the rally. However, shipping containers placed on various roads continued to make it difficult for participants to reach the venue without difficulty.

Former prime minister Gilani, who also served as the host to the Multan rally, hailed the PDM’s supporters for putting on a “massive” show despite the government’s attempts to stop it. “I want to congratulate you for not letting containers and blockages prevent you from arriving here,” he said, adding that the rally coincided with the Founders’ Day of the PPP. He said that the united opposition had already staged successful rallies nationwide, including in Gujranwala, Peshawar, Quetta and Karachi. “They [government] tried to stop this rally, but despite all their efforts, they were unable to stop this,” he said.

The Awami National Party’s Mian Iftikhar Hussain slammed the government for demanding the opposition postpone its public gatherings to curb the spread of the novel coronavirus while continuing to stage their own events. “COVID-19 is not as dangerous as Imran Khan,” he said, adding that the government’s attempts to damage this rally had only served to strengthen it.

“We want free and fair elections [to remove Imran Khan],” Hussain said, adding that his party was fighting for provincial autonomy and constitutional rights for all. “Targeted killings, missing persons … this should all end,” he said.

The Balochistan National Party’s Akhtar Mengal hailed the crowd for defeating the government’s attempts to prevent the rally from occurring. “The government’s own incompetence has resulted in us addressing this rally on the streets rather than in a stadium as we had envisaged,” he said. He also reiterated his calls for respecting the vote, and for an end to the security establishment’s role in politics. “Our sole goal is not to oust Imran Khan; its to prevent institutions from installing another ‘mini-Imran’ and to bar them from interfering in the political process,” he added.

Mahmood Khan Achakzai of the Pakhtunkhwa Milli Awami Party said the PDM’s purpose was to protect the country at a time when it was going through a particularly testing time. He slammed the government for its “fascist policies,” and specifically called out P.M. Imran Khan for claiming the governments of Asif Ali Zardari and Nawaz Sharif were ‘selected’. “This proves Khan is accepting the role of the military in the country’s politics,” he said.