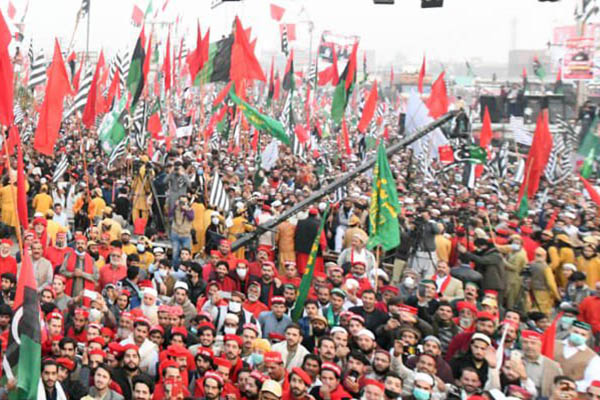 Leaders of the political parties comprising the Pakistan Democratic Movement (PDM) on Sunday predicted the incumbent Pakistan Tehreek-e-Insaf-led government would not survive beyond January 2021 as they staged their latest rally in Peshawar.

The latest power show of the united opposition proceeded despite district administration of the Khyber-Pakhtunkhwa capital refusing to grant permission for it over threats to security, as well as a surge in coronavirus infections in the city.

In his address, Pakistan Peoples Party (PPP) Chairman Bilawal Bhutto-Zardari predicted that January 2021 would be the incumbent government’s “last month in power.” He said it was the people’s right to decide how their country should be governed, and what kind of leaders should rule over it, adding that protests against alleged rigging in the Gilgit-Baltistan polls were ongoing.

“All of Khyber-Pakhtunkhwa is demanding ‘Go, Imran, Go!’” he said, noting that the region’s “brave and honorable” people had rendered innumerable sacrifices in the fight against terrorism. “Despite this, the selected did not dare raise his voice against terrorists,” he said.

Warning that terrorism was once more on the rise, Bhutto-Zardari said that the opposition would not allow it to spread fear across the land once again. “We know how to protect this land,” he said.

Responding directly to the government’s claims that the opposition was “playing with people’s lives” by continuing its rallies despite the second wave of the coronavirus, the PPP chairman questioned the selective nature of the PTI’s response. “When it is time for the people to protest, the government is reminded of coronavirus, but when we demand salary increments for doctors, nurses and paramedics on the frontline, they forget all about it,” he said.

The PPP chairman also condemned the flour, sugar, oil and gas crises, and accused the incumbent government of being the “most corrupt.” He said the National Accountability Bureau (NAB) did not see any of the alleged corruption of this government—the Peshawar BRT or the Malam Jabba lease—and vowed it too would be held accountable. “When the time comes for a reckoning, people will hold them all accountable,” he said.

The PPP leader’s speech was interrupted by Pakistan Muslim League (Nawaz) Vice President Maryam Nawaz, who regretted being unable to address the participants after news of her grandmother’s death in London was conveyed to her.

He said the opposition was united in its view that the incumbent government had assumed power through a “rigged election.” He claimed the huge turnouts at all the PDM rallies so far had shocked the government. The people have “rejected the rigged government,” he claimed. “We have declared war and retreating from the battlefield is a grave sin,” he said.

Rehman reiterated his allegations of Imran Khan’s government being the “worst enemy” of Pakistan’s economy, and also blamed it for damaging several of the country’s relationships with its international allies. “You are unreliable in the eyes of the nation and its neighbors,” he claimed.

“We [PDM] will make the country the Pakistan it was meant to be—a nation with the rule of democracy and the supremacy of Parliament,” he said, adding that the opposition would never compromise on any province’s due rights under the National Finance Commission award.

Immediately after the rally’s conclusion, Information Minister Shibli Faraz issued a press statement in which he urged everyone who had attended it to quarantine for two weeks to contain the spread of COVID-19.

Claiming the people of Khyber-Pakhtunkhwa has “boycotted” the rally and prevented it from becoming a “large gathering,” he claimed this had “thwarted the anti-people agenda” of the opposition.

“The corona epidemic is a fact, not a myth,” he said, and reiterated his claims of the opposition endangering people’s lives by refusing to postpone their political events despite the rising daily infections nationwide.