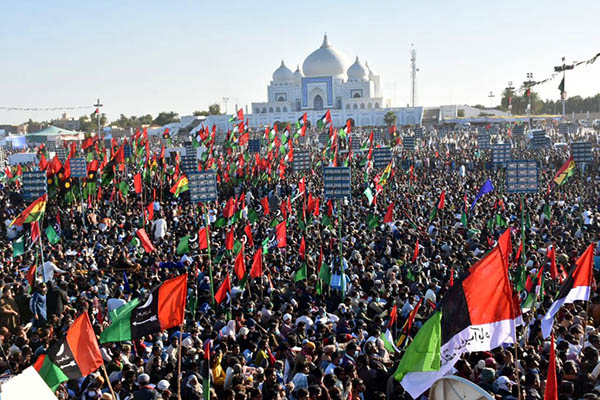 The 11-party united opposition’s Pakistan Democratic Movement (PDM) on Sunday staged its latest “power show” in Larkana, Sindh’s Garhi Khuda Bux, reiterating their threats of a long march on Islamabad if Prime Minister Imran Khan does not step down by Jan. 31.

Marking the 13th death anniversary of former prime minister Benazir Bhutto, the public gathering of thousands was hosted by the Pakistan Peoples Party (PPP), with party Chairman Bilawal Bhutto-Zardari promising that if Khan did not resign, jiyalas (PPP loyalists) would “drag him off his seat.”

Recounting his family’s struggles for democratic rule in Pakistan, Bhutto-Zardari said they had “sacrificed” their lives in the service of the people. “Benazir is alive today in the hearts of everyone, and those who clashed with her, their names are forgotten,” he said, specifically citing Gen. Ziaul Haq and Gen. Pervez Musharraf.

Claiming that if Benazir were still alive, the “oppressive [PTI-led] government” would not be in power, he said that the time of accountability for “criminal rulers” was coming to an end. “If you are with me, no power in the world can stop us,” he said in his address to PPP supporters. “If the opposition calls for a long march, you have to be ready. We are on the same page and on the same stage,” he said, seemingly in direct response to government claims that the alliance was rupturing over whether or not to resign from assemblies.

In an address delivered via video-link due to ill health, former president Asif Ali Zardari also hit out at Khan and his team’s poor governance. “It takes a different mindset to run a country [than to run a cricket team] and these people do not possess it,” he said, adding that the government would collapse under its own weight if it did not have the support of the “selectors.”

Challenging the government to hold fresh elections to see who the public supported, the PPP president alleged the PTI was using anti-graft watchdog National Accountability Bureau to “blackmail” people. Noting that the PPP had “welcomed” the Pakistan Muslim League (Nawaz)’s election in 2013, he said the people wanted a government of their own choice.

“We can remove Imran Khan Niazi. We just need to change our approach,” he said, urging the gathered crowds to be ready to “fill up jails” to counter the government.

PMLN Vice-President Maryam Nawaz commenced her address in Sindhi, thanking host PPP and the gathered crowds for their warmth and hospitality. Lamenting that the first woman prime minister of the Muslim world, Benazir Bhutto, had “to lay down her life” for her struggle, she said this was a pain shared between her party and the Bhuttos.

“The grief is still fresh after two-and-a-half years,” she said of her own mother’s death. “I still got to spend time with my mother, but Bilawal lost his mother when he was still so young,” she said, as she narrated her memories of a day she had spent with Benazir.

“Benazir fought for her father’s struggle and vision and then ultimately joined him in the afterlife,” she said. “I also wish to struggle for a united Pakistan,” she added.

Referring to the Charter of Democracy signed between Benazir and Nawaz Sharif, Maryam said it was an event that had altered Pakistan’s fate. Vowing to continue the process started by their parents, she said that Bilawal and she would not allow anti-democratic forces to take advantage of the political mistakes of the past.

“In 2008, when there was talk of the PPP government being toppled, Nawaz Sharif quashed such thinking and said that the coming and going of governments is a decision for the people to make, not political parties,” she said, and slammed the incumbent government for thinking their “divide and rule” strategy could hurt the PDM.

Referring to a recent interview of the prime minister with a local journalist, she recalled that when he was asked whether people should commit suicide due to inflation, he had responded by saying ‘what can I do?’

“Those who brought you to power will have to step back,” she said, adding that today “corrupt” people were being pardoned, while political leaders were being “thrown into jail and made to face courts.”

Referring to former military ruler Musharraf, she said Pakistan’s doors would remain closed to him due to the “courage” of Justice Waqar Seth, who died of COVID-19 earlier this month. “We will keep his memory alive,” she said.

On the PDM alliance, Maryam vowed that the PTI’s dreams of a rift within the opposition would not materialize. “You are not at war with the PDM but with 220 million citizens,” she said, as she claimed Khan had “lost this battle.”

Representing the Jamiat Ulema-e-Islam (Fazl), Maulana Abdul Ghafoor Haideri paid tribute to Benazir Bhutto at the rally, calling her a “woman with nerves of steel.” Slamming Imran Khan as a “cowardly” ruler, he said the PTI-led government had left the impoverished desperate for any relief.

“Today we have come to pledge that we will send the puppet government home,” he said and also urged the gathered PPP workers to prepare for a long march on Islamabad.

National Party President Abdul Malik Baloch claimed the government’s policies had resulted in farmers “dying of hunger,” and also slammed its attempt to “occupy” islands off the coast of Balochistan. “The government in power today is a slap in the face of democracy,” he added.

Sardar Akhtar Mengal of the Balochistan National Party said ties between his province and Sindh predated Pakistan and could not be dented. Awami National Party Senior Vice President Haider Khan Hoti vowed he would follow in the footsteps of Benazir and would never stop serving the people of Pakistan.