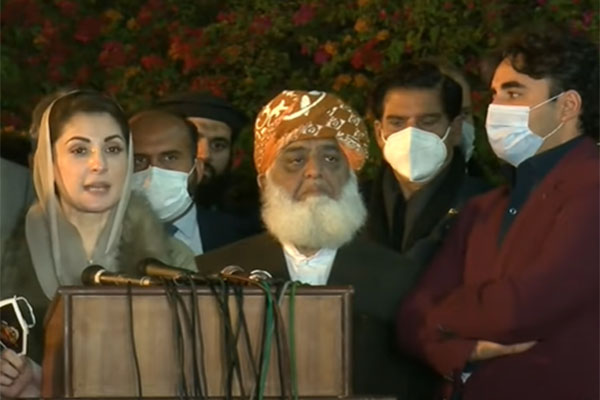 The united opposition’s Pakistan Democratic Movement (PDM) on Monday demanded that Prime Minister Imran Khan’s government step down by Jan. 31 or risk street agitation, including a long march on the federal capital.

“Today, we want to make clear to the government that it should resign by Jan. 31,” PDM President Maulana Fazlur Rehman told a press conference after a meeting of senior opposition leaders in Lahore. Flanked by Pakistan Muslim League (Nawaz) Vice President Maryam Nawaz and Pakistan Peoples Party Chairman Bilawal Bhutto-Zardari, he said that if the government did not resign by the end of January, the opposition would launch a long march toward Islamabad—the exact date of which has yet to be decided.

In seeming recognition of the Pakistan Tehreek-e-Insaf’s rebuffing of opposition threats, Rehman said that supporters of the PDM’s constituent parties and the general public should start preparing for the long march “from today.”

The PDM president, who also heads his own faction of the Jamiat Ulema-e-Islam, said the anti-government alliance had signed a “declaration” of intent regarding their mutual objectives. He reiterated that said lawmakers from PDM member parties in the national and provincial assemblies would submit their resignations to their respective party leaders by Dec. 31, adding that these would be submitted to the speakers “at an appropriate time.”

According to Rehman, the heads and representatives of the PDM’s constituent parties would form committees in their respective provinces to commence preparations for the long march. “During today’s meeting, anger was expressed at the way the military’s media affairs wing put pressure on electronic media for negative propaganda against the [Lahore] rally,” he said, claiming that the Dec. 13 rally would be “remembered in history.”

Maryam, meanwhile, said that it was “concerning” that some TV channels had been broadcasting “baseless” news about the Lahore rally. Some channels, she alleged, had started declaring the rally a “failure” even before any of the opposition leaders had reached the venue. “Our media didn’t show the truth but foreign media, including the BBC and Al Jazeera, have shown how many people were actually in attendance,” she added.

“There is a video of me on record showing me appreciating and acknowledging the efforts of my party workers and Lahore MNAs and MPAs [in organizing the rally],” she said, dismissing reports that she had criticized the “failure” of the rally.

Claiming that Sunday’s rally was a “massive” success, the PMLN leader said that thousands had been forced to camp out outside the venue due to lack of space. “I have never seen a rally like this in my life. Despite the cold, I could not see a single chair … people were enthusiastically standing for the opposition leaders,” she said, adding that this was “against the odds” with the threat of the novel coronavirus and the heavy-handed tactics of the “fascist” government.

To a question on whether the opposition would be willing to sit down with the government and negotiate an end to its movement, Bhutto-Zardari said that all the parties united under the PDM’s umbrella would jointly decide on any such development. “As far as dialogue is concerned, then the PDM’s stance was presented yesterday in front of the people of Lahore. The time for dialogue is over. Now is the time to march and for Imran [Khan]’s resignation,” he added.

The PDM concluded the “first phase” of its anti-government movement with its Lahore rally on Dec. 13. According to the opposition’s leadership, the next phase would call for street agitation, followed by a long march on the federal capital. The PDM has also vowed to resign from Parliament en masse, but the timing of any such moves has yet to be made public.