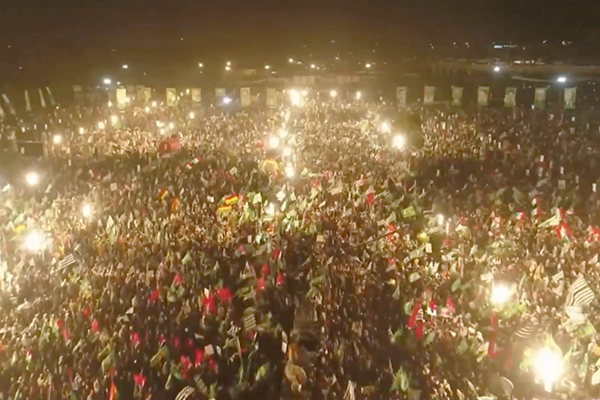 The united opposition’s Pakistan Democratic Movement (PDM) staged the “final phase” of its anti-government public gatherings at Lahore’s Minar-e-Pakistan on Sunday, reiterating warnings of a “long march” on Islamabad and an end to the incumbent government’s rule.

Staged despite the government warning of security threats and fears over it contributing to the COVID-19 pandemic, the public gathering attracted thousands—but fell short of setting any records, with government lawmakers claiming it proved Lahore had “rejected” the opposition’s narrative. In contrast, the opposition has claimed that they are very pleased with the response.

The rally concluded with a speech from ousted prime minister and Pakistan Muslim League (Nawaz) supremo Nawaz Sharif, delivered via video-link from London where he has been since 2019 for medical treatment. Claiming credit for ending the gas, power, and terror crises that had been plaguing Pakistan when he assumed power for a third time in 2013, he reiterated allegations of Prime Minister Imran Khan having been “installed” by the security establishment.

He said the prime minister—and the people who brought him into power—were equally to blame for the current state of the country. “They pushed the country into unprecedented inflation and unemployment,” he said, without directly naming anyone unlike his previous speeches.

Sharif claimed Khan’s collaborators were profiting off the wheat and sugar crises, questioning why no one saw this corruption. “My only crime is that I speak the truth … I am fighting your case,” he claimed, adding his narrative was that of Pakistan’s founder, Quaid-e-Azam Mohammad Ali Jinnah.

“When you violate the Constitution, involve yourself in political matters, and victimize political leaders, then questions will be raised,” he said of the security establishment. He alleged that judges were pressured into penning biased decisions and polls were rigged, but the government’s concern was with the people he named. “So who should I name, WAPDA?” he asked.

He claimed that the public’s response to the PDM had proven that if the PTI government continued in power, it would jeopardize the country’s security, adding that there could be no prosperity in a “hijacked democracy.”

Reiterating his calls for an end to “selected” rule, the former prime minister urged the crowds to help oust the incumbent government from power.

“Our struggle is entering into a decisive phase. Come out of your homes … I particularly ask the youth to stand up to protect their country like their ancestors did during the independence movement,” he said.

The PMLN leader claimed PMLN lawmakers had already started to submit their resignations, but added that any decision on their submission would come from the PDM platform. The narrative of “Vote ko Izzat do” has gained popularity, and is being supported across the country, he added.

The PMLN vice-president, who led drives across Lahore inviting the public to participate in the PDM rally, commenced her speech by thanking everyone who had come out in protest. “Lahoris have buried the [government], which came into power on fake promise of change at Minar-e-Pakistan today,” she said, and reiterated jibes directed at Imran Khan of being ‘Tabedaar Khan.’ She claimed the government was now begging for “NRO,” but the opposition would not give it.

“Ever since COVID-18 [Imran Khan] has formed government, sugar, wheat, electricity and people’s livelihood have been quarantined,” she said—though she also urged the public to wear face masks to curb the spread of coronavirus.

“Please come to our rallies but don’t forget to wear your masks … I urge you to take precautions because I care about your health,” she said.

She claimed the public had recognized that the prime minister had made their lives miserable and reiterated claims of him profiting off a “conspiracy” that had disqualified her father from contesting the 2018 elections.

“The media is being pressured into saying that the PDM rally in Lahore is a failure by certain elements … but we all know the truth,” she said. “The people of Lahore have announced their verdict that Tabedaar Khan has to go for making millions unemployed and destroying businesses and economy,” she said, adding that there was nothing in the opposition’s demands for free and fair elections and for the country’s institutions to work within their constitutional limits.

The Jamiat Ulema-e-Islam (Fazl) chief—who also serves as president of the PDM—warned that the public’s resentment against the incumbent government could soon lead to “anarchy.” Urging the security establishment to stop meddling in the political affairs of the country, he said the people should be allowed to choose their own leaders.

“If people’s rights continue to be denied then there can be no national unity,” he said. “Imran Khan’s government has weakened the country so much, we couldn’t even prevent India from usurping Kashmir,” he said and claimed an “international establishment” was pulling the strings.

The PDM leader said opposition parties would march on Islamabad by the end of January or the start of February. “We will move towards Islamabad with resignations in hand and will not stop until the end of this illegitimate government,” he added.

PPP Chairman Bilawal Bhutto-Zardari claimed the PTI government was not aware of the miseries of the public “because it did not come into power through the people’s mandate.” He reiterated allegations of Imran Khan being installed as prime minister with the help of “selectors.”

Referring to his own mother’s record-breaking rally in Lahore, he said the city’s people had “endured oppression, flogging but did not bow to tyranny during the dark days of Ziaul Haq’s military rule.” He also reiterated calls for the release of Opposition Leader Shahbaz Sharif and PPP leader Khurshid Shah from detention.

Bhutto-Zardari claimed the “time for dialogue had ended,” and warned that the establishment would now have to listen to the masses. “It is time for a long march to Islamabad … we will force Imran Khan to resign,” he announced. “Dialogue can only be held after the removal of the dummy prime minister,” he added.

Balochistan National Party chief Akhtar Mengal claimed Lahore’s rally was the funeral rites of the “undemocratic forces that disrespect the Constitution and steal people’s mandate.” He said the only way to save the country was by fighting against the ‘Khalai Makhlooq’ (aliens). Similarly, Qaumi Watan Party’s Aftab Ahmed Khan Sherpao praised the crowds gathered at the Minar-e-Pakistan, adding that the government’s tactics had failed to stop people from attending.

“We cannot accept a government that was formed through rigged elections and we want all institutions to work within their constitutional limits,” he said.

Awami National Party leader Mian Iftikhar Hussain warned the government against any chances to the 18th Amendment, which guarantees provincial autonomy, while Pashtunkhwa Mili Awami Party’s Mahmood Khan Ackahzai said the PDM was not meant to insult political opponents, but rather the foundation of the country under the Constitution and democratic norms.

Awami National Party’s Amir Haider Khan Hoti accused the government of trying to downplay the Lahore rally and claimed the PDM had staged a “grand power show.” He also hailed Nawaz Sharif and Maryam Nawaz, saying there would be no compromise on the supremacy of Parliament and democracy.