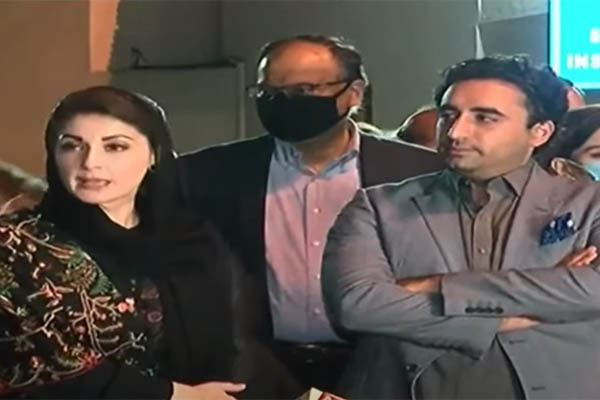 “Just like Karachi, Peshawar and Gujranwala, Lahore will also send a strong message to Islamabad that our puppet prime minister stands alone,” Bhutto-Zardari told a press conference alongside Nawaz after the two met at the latter’s Jati Umrah residence.

Stressing that the people of Pakistan wanted “true democracy,” the PPP leader warned the government and its “facilitators” that they would not be able to stand against the aspirations of the masses for much longer. “We believe the PDM’s first phase has been successful, and after Dec. 13 we will enter our movement’s second phase,” he said. “All of you will see that this government will pack its bags itself,” he added.

To a question, Bhutto-Zardari said that the opposition parties comprising the PDM were political and did not want to create any situation that would benefit the “third force.” He reiterated that he would take the matter of resigning from Parliament to his party’s Central Executive Committee, which would make the final decision on it after deliberations.

Bhutto-Zardari also praised his younger sister, Aseefa, for addressing the Multan rally in his place. “I warn the selectors/facilitators that whatever they want to do with us they should remember that behind us is Aseefa Bibi and I drive power from my sister,” he said.

Addressing the press, Nawaz thanked Bhutto-Zardari for inquiring after the health of her father, PMLN supremo Nawaz Sharif, and for conveying his condolences over the death of her grandmother, Shamim Akhtar. “We [Bilawal and Maryam] ate together and discussed several matters related to the PDM and the upcoming rally,” she said.

On rumors of the federal government seeking a dialogue with the opposition, Nawaz questioned why this offer had only come up “after they realized that their government is slipping away from them.” She claimed some government ministers had approached her for talks but she had “rejected them outright.”

The Punjab government has repeatedly claimed that while it would not prevent the PDM from staging its rally, it would also not grant it official permission for the gathering. Punjab Law Minister Raja Basharat has claimed that action would be taken against the organizers and facilitators of rallies.