In letter to Indian counterpart, Pakistani prime minister stresses on peaceful resolution of all outstanding disputes, including Jammu and Kashmir 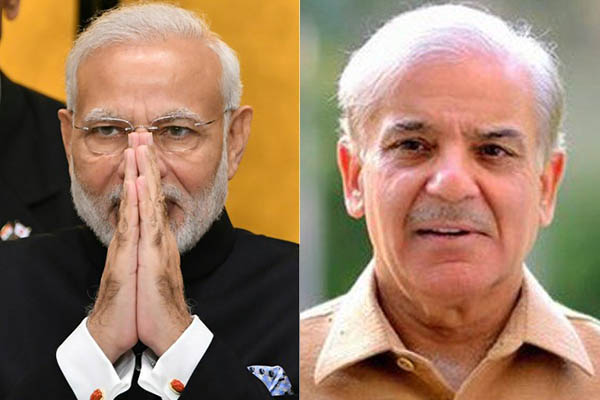 Prime Minister Shahbaz Sharif last week told his Indian counterpart, Narendra Modi, that Pakistan believes peaceful and cooperative ties between the neighboring nations is vital for the socio-economic uplift for their people, as well as the surrounding region.

Responding to Modi’s message of congratulation for his election as the prime minister, Sharif wrote a letter to the Indian prime minister in which he reiterated the importance of peace between the rival nations. “I wish to thank you for your greetings and good wishes on my assumption of office as the Prime Minister of Pakistan,” he wrote.

“I wish to convey that Pakistan remains committed to the maintenance of regional peace and security,” he said, adding that Islamabad’s sacrifices in the global fight against terrorism were “well-known.” Stressing that Pakistan believes peace between Islamabad and Delhi is imperative for the “progress and socio-economic uplift of our people and for the region,” he said that this could be “best achieved” through meaningful engagement and the peaceful resolution of all outstanding disputes, including the “core” issue of Jammu and Kashmir.

“Let us secure peace and work for the progress and prosperity of our people,” he added.

P.M. Sharif was sworn in last week after the contentious ouster of Imran Khan through a vote of no-confidence. Shortly after, Modi wrote a letter congratulating Sharif on his new post, and also posted acknowledgements on Twitter. “India desires peace and stability in a region free of terror so that we can focus on our development challenges and ensure the well-being and prosperity of our people,” he wrote.

In line with his official letter, P.M. Sharif also wrote a posting on Twitter thanking Modi for his good wishes and expressed his desire for peaceful and cooperative ties between Pakistan and India for the socio-economic uplift of people in both countries.