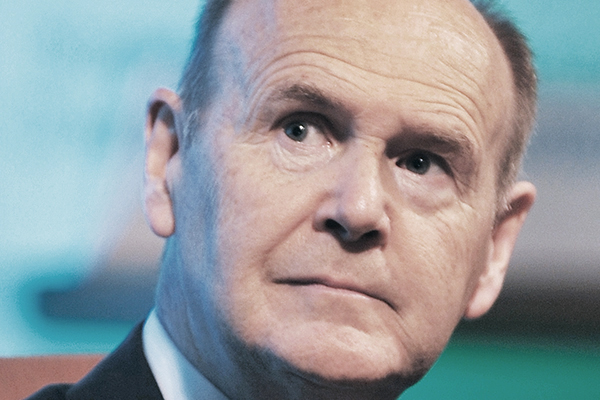 “I’m here because I think Pakistan is an important market,” Sir John Peace told Newsweek in Karachi in November on his first visit to the country. “We don’t like to take a short-term view. We are very excited about the opportunity of Pakistan becoming a key crossroads for much of that trade corridor from Pakistan through ASEAN countries to China,” said the chairman of London-headquartered Standard Chartered bank.

Peace’s optimism about his bank’s prospects in terrorism-ravaged Pakistan comes despite the recent shutting down of 14 Standard Chartered branches across the country in 2013. Peace described this as “optimization”: “We have been rationalizing our branch network,” he said, adding that “a vast majority of our [existing] branches” have been upgraded while others will be completed in 2014.

In any case, brick and mortar banking is passé, says Christos Papadopoulos, the bank’s chief executive officer for the Middle East and North Africa. “We are absolutely delighted with the customer pickup in our electronic transfer channel,” he told Newsweek. “Standard Chartered Pakistan is leading the way within the Standard Chartered world in terms of clients using our electronic [banking] channels.” He said the bank would continue to invest in such virtual branches in the 70 countries where it operates.

Did security concerns force the bank to close down some of its branches? It closed shop in Afghanistan, selling its operations there to a local bank, because of the country’s unpredictable security situation. But it remains bullish about other at-risk countries like Pakistan and Iraq, where it is opening three branches. “Like Pakistan, Iraq has its security challenges, and we are mindful of that, but we believe we can operate securely,” said Papadopoulos. “Our international clients are asking us to go there and support what they are doing there.”

According to Peace, who also acknowledged the security risks posed to investors in Pakistan, things are improving—or at least will in the future. “We are taking a long-term view. We are looking directionally and investors will be looking for the same thing recognizing that [security] takes time.” He added: “What we want to do as an international bank in Pakistan is to support development. Only by coming here can I show that support.”

Standard Chartered established its operations in Karachi in 1863. It currently has a 132-branch network across 29 Pakistani cities—the largest for any foreign bank. Globally, the bank has 1,700 branches and employs about 75,000 people. An estimated 90 percent of its “income and profits,” it says, come from the Asian, African, and Middle Eastern markets. In Pakistan, the bank earned a pretax profit of Rs. 11.3 billion up until the third quarter of the current financial year. This is a 63 percent increase from the corresponding period last year.

Peace is especially bullish about investments in Pakistan’s infrastructure projects, energy sector, and small and medium sized enterprises. “Many large companies in Pakistan are trading in growth markets in Asia and the Middle East using our network,” he said, adding that SMEs can quickly become growth leaders for Pakistan. “We have expertise in it and I hope we can play a significant part in that economy.”