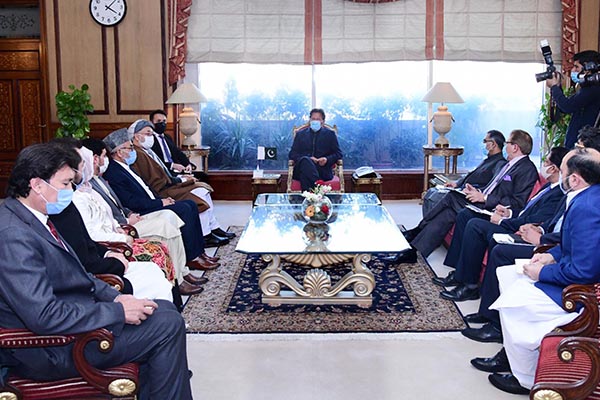 During separate meetings with Hizb-e-Wahadat Islami Afghanistan Chairman Mohammad Karim Khaili, both men discussed matters of mutual interest, regional peace and stability, and current developments in the Afghan peace process. According to a statement issued by the Inter-Services Public Relations (ISPR), the Army chief said a “stable and prosperous Afghanistan at peace with itself and its neighbors is in Pakistan’s national interest.”

The military’s media wing said the visiting dignitary had appreciated Pakistan’s positive role in achieving peace in Afghanistan, as well as the Army chief’s vision of the future of Pak-Afghan relations.

During his meeting with Khalili, P.M. Khan conveyed Pakistan’s commitment to strengthening bilateral ties with Afghanistan, including trade and economic ties and people-to-people linkages, according to a statement from the Prime Minister’s Office.

The prime minister stressed his longstanding stance that there was no military solution to the conflict in Afghanistan and that a negotiated political settlement was the only way forward. “Noting that the Afghan people had suffered gravely due to prolonged conflict in the country, the prime minister stressed that after the Afghan people, Pakistan was most desirous of peace and stability in Afghanistan,” it added.

The Hizb-e-Wahdat-e Islami also called on Foreign Minister Shah Mahmood Qureshi and discussed matters of mutual interest, including the Afghan peace process. During the meeting, Qureshi reiterated Islamabad’s stance that there was no military solution to the Afghan conflict, and only political dialogue could resolve the matter.

Welcoming the progress made during intra-Afghan talks, Qureshi expressed optimism about the ongoing second round of talks being held in Doha. He emphasized that regional peace was linked to stability in Afghanistan, adding the peace process is a unique opportunity for the Kabul government.

Qureshi regretted that India was acting as spoiler in Afghanistan, adding that Islamabad had presented irrefutable evidence of its malfeasance to the world community. He said Islamabad was taking concrete steps to promote bilateral relations with Kabul, adding that Pakistan had also introduced a new visa policy to facilitate Afghans.

The delegation arrived in Monday for a two-day visit and is also slated to meet National Assembly Speaker Asad Qaiser. According to the Ministry of Foreign Affairs, Khalili’s visit is part of Pakistan’s ongoing policy to reach out to political leadership in Afghanistan to forge common understanding on the Afghan peace process and deepen people-to-people linkages.

“Pakistan’s fraternal ties with Afghanistan are rooted deep in shared history, faith, culture, values and traditions,” read a statement. “Pakistan fully supports all efforts for peace, stability and prosperity of the Afghan people.” It said that Islamabad was committed to supporting “an inclusive, broad-based and comprehensive political solution of the conflict in Afghanistan through an Afghan-led and Afghan-owned peace process.”