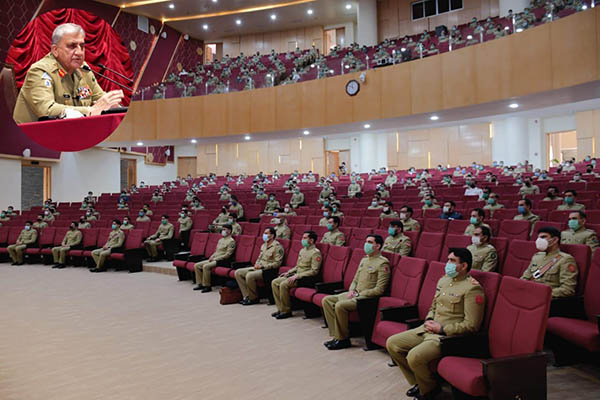 “This can be complemented through meaningful international support and will to take on challenging regional issues,” he told officers and faculty during a visit to the Command and Staff College in Quetta, according to a statement issued by the Inter-Services Public Relations (ISPR).

Highlighting emerging internal and external security challenges, Gen. Bajwa said that a well-trained and professionally competent Army was a guarantor of peace. “The Pakistan Army, with the backing of the nation, is one such formidable force,” he said.

According to the ISPR, the COAS stressed the need for officers to focus on professional excellence, as well as keeping abreast with latest domestic and international developments to overcome new challenges.

Discussing the ongoing coronavirus pandemic, which has claimed over 1,600 lives across Pakistan since the country reported its first cases in February, Gen. Bajwa said that the Pakistan Army was working with other state institutions to mitigate the challenges faced by people of Pakistan because of the virus.

“A cohesive, national effort is necessary to take Pakistan toward progress and prosperity,” he added.

The Army chief’s statement on resolving long-pending disputes comes as ties between Pakistan and India continue to be at a nadir. Last week, Islamabad approached the U.N. over Delhi’s attempt to turn the India-held Jammu and Kashmir territory into a Hindu-majority region through a domicile law that would allow non-Kashmiris to acquire permanent residences there.