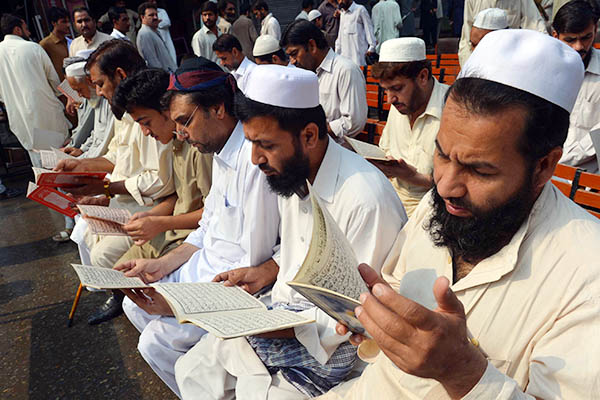 With flagging public support, Pakistan’s government faces an uphill struggle in negotiating peace with the Taliban.

Three weeks after Pakistan’s main political parties backed the idea of talks with the country’s Taliban, the plan looks in deep trouble, hit hard by a wave of bloody attacks.

In the space of a week, Peshawar has suffered three major bombings, killing 142 people—the vast majority of them civilians. Hurried denials issued by the main umbrella Tehreek-e-Taliban Pakistan (TTP) group hint at divisions within the organization and the rise of splinter factions keen to pursue their own agenda rather than follow the central leadership.

Peshawar is no stranger to bloodshed. It lies on the edge of Pakistan’s tribal areas and has frequently been hit by bombings and shootings. But the brutality of the recent attacks: a suicide bombing on a church service, a bomb on a bus carrying government staff home after work and the latest, a powerful car bomb targeting a busy market on Sunday, has shocked locals.

“The government should publicly hang the killers of innocent people,” said Gul Mohammad, a Peshawar junk shop owner. “I have a very simple question: why is the government so reluctant to launch an Army operation against the Taliban?”

The TTP insists it targets only legitimate military assets in its fight against the Pakistani state and says the recent attacks are a conspiracy to scotch the proposed talks.

But a Taliban commander in the country’s northwest admitted the prospect of negotiations had led to division within the movement, which has pledged allegiance to one-eyed Afghan Taliban chief Mullah Omar as well as Al Qaeda.

“There are even more differences on several other issues and you know Asmatullah Muaweya has also been sacked by our main leadership,” said the commander on condition of anonymity. Muaweya was the militants’ commander in Punjab province, cast out by the TTP senior leadership for welcoming the government offer of peace talks.

Hardline groups closer to Al Qaeda, more sectarian and anti-West in outlook than the mainstream TTP, have rejected talks. Factions from Mohmand and Khyber tribal areas and Darra Adam Khel district—all neighboring Peshawar—are staunchly opposed and the authorities are probing whether they were behind the recent attacks.

Another militant source said overtures made to certain groups had triggered the Peshawar attacks as others sought to make their influence felt. “The latest bout of attacks has come because the security establishment is selective in talking to the militants. It wants to talk to some elements while crushing the others,” the source told AFP.

But security officials remain skeptical about the TTP denials, saying the sophisticated nature of the three attacks suggested an experienced, well-equipped group was behind them.

“Though TTP has publicly disowned the latest series of bombings, we are very much convinced that TTP as an organization is involved,” said a senior security official in Peshawar. “They want to build pressure on both provincial and central governments before the peace talks.”

A pair of suicide bombers smuggled into a church, a remote-controlled bomb planted on a government staff bus and a 200kg car bomb exploding in a busy market in the heart of Peshawar—all this could not be the work of a fledgling group, the official said.

Rahimullah Yusufzai, a senior analyst and expert on militancy in Pakistan said that while the perpetrators of the past week’s atrocities were unclear, the outcome was not.

Even with public backing, the two sides’ positions look difficult, if not impossible, to reconcile.

On one side the TTP have laid down exacting conditions for taking part in talks—the withdrawal of troops from the tribal areas, the release of their prisoners and a government ceasefire. On the other, Prime Minister Nawaz Sharif, in New York for the U.N. General Assembly as the attacks unfolded, told the Wall Street Journal that the TTP must recognize the Pakistani Constitution and lay down their weapons.