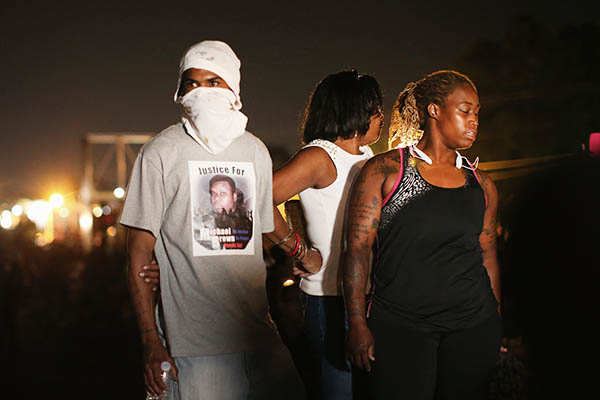 Hundreds of people demonstrated peacefully Thursday in a Missouri town rocked by days of protests over the fatal shooting of a black teenager, hours after state police were ordered to replace local forces.

Police shot and killed unarmed 18-year-old Michael Brown on Saturday in the St. Louis suburb of Ferguson, triggering protests and then a police crackdown in which authorities fired tear gas and rubber bullets and arrested reporters, sparking complaints led by President Barack Obama. Brown’s death and the subsequent action by a mainly white police force in a majority black town led to allegations of racism and stirred comparisons with the February 2012 fatal shooting of unarmed teenager Trayvon Martin in Florida by a member of a civilian neighborhood security patrol.

State Governor Jay Nixon said the decision to draft in the Missouri Highway Patrol had been taken after Ferguson was left looking “like a war zone” after four days of rioting—and there was an altogether different atmosphere on the streets after the governor’s move.

A local African-American officer, Captain Ron Johnson, took charge and was at the peaceful march, hugging and shaking hands with demonstrators, reporters at the scene said, a signal of the marked change in approach from police. “We’re all in this together … we’re not in this for fear, to intimidate,” Johnson said, according to a Washington Post reporter in Ferguson.

In New York, hundreds of people protested against police brutality. Earlier in the day, Obama called for “peace and calm,” adding authorities had a responsibility to be “open and transparent.”

“Now is the time for peace and calm on the streets of Ferguson,” Obama said. “Now is the time for an open and transparent process to see that justice is done.” He said there was “no excuse” for both those engaged in anti-police riots and for police who used “excessive force” against peaceful protesters.

The mostly young and African-American protesters were also shouting slogans against last month’s death of a black father after a New York policeman put him in an apparent chokehold. “Eric Garner, Michael Brown, Justice,” some signs read.

The county police response to daily, and nightly, protests since the shooting had been aggressive, with rifle-toting police in military-style fatigues and body armor deployed to crush dissent. “Lately, it looks like a war zone and that is not acceptable,” Nixon said. Johnson said police would show respect as they try to restore calm.

“I grew up here, and this is currently my community and my home. It means a lot to me personally that we break this cycle of violence and build trust, and show the utmost respect,” he said, adding he understands “the anger and fear that the citizens of Ferguson are feeling.”

Johnson promised he would not blockade the streets, would help protect residents’ rights to assemble and protest, and would set up a media staging center, the Post reported. He ordered officers managing the crowds to remove their gas masks.

Nixon chose a black trooper to take over operations in a town with an African-American majority after an incident widely blamed on the perceived racism of the mainly white police force. But the governor did not cede to one key demand of the protesters.

Control of the investigation into the police shooting of Brown will remain in the hands of the St. Louis County force. The U.S. Department of Justice has already announced a separate federal investigation. Many people in Ferguson are also frustrated at the lack of information provided about the investigation, including the withholding of the name of the officer who shot Brown and even how many shots were fired.

The Brown family has also appealed for calm and urged federal authorities to carry out an independent autopsy of their son’s body. “There is nothing Michael Brown could have done to justify him being executed in broad daylight, and this is the worst police shooting I have ever seen,” their attorney Benjamin Crump told CNN. “We have to get answers, and it has to be transparent, and that’s why we’re calling on the Justice Department and the attorney general to do an independent autopsy.”

Obama, in his remarks, said he had already tasked the FBI with independently probing Brown’s death along with local officials on the ground. He added that he had made clear to Attorney General Eric Holder “that we should do what is necessary to determine exactly what happened and to see that justice is done.”