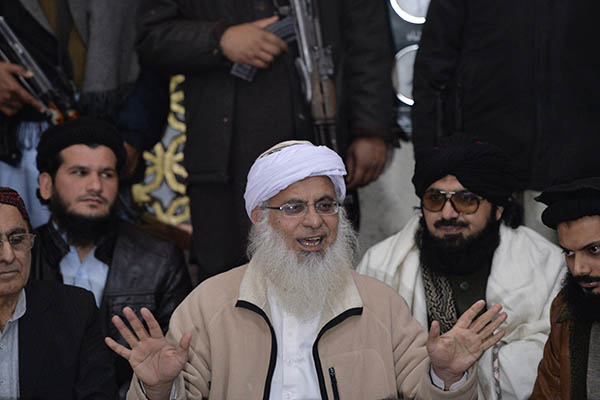 Maulana Abdul Aziz says he will not participate in negotiations unless imposition of shariah law becomes part of discussions.

Pakistan’s fledgling peace talks with the Taliban suffered a fresh blow on Friday as a negotiator for the militants said he would take no further part until the agenda included the imposition of Islamic shariah law.

The intervention from former Lal Masjid cleric Maulana Abdul Aziz comes a day after teams representing the government and Tehreek-e-Taliban Pakistan (TTP) held a preliminary round of talks in Islamabad. There has been widespread skepticism about the chances of the peace initiative achieving a lasting solution to the TTP’s bloody seven-year insurgency.

Aziz said Pakistan’s Constitution should be replaced with the holy Quran and the Sunnah, or teachings of Islam’s Prophet. “That should be the law in Pakistan and until the committee brings this point on the agenda I won’t be part of negotiations,” he told reporters on Friday. He said he would remain part of the TTP’s three-man delegation led by fellow cleric Maulana Sami-ul-Haq, unless told otherwise, but would not come to the negotiating table. “I won’t participate in talks until they include a clause about the imposition of Islamic law,” he said.

On Thursday, the government and TTP negotiators, including Aziz, issued a joint statement agreeing to work within the framework of Pakistan’s Constitution.

But Aziz’s move threatens to undermine the talks and the government side has already voiced doubts about the composition and authority of the TTP’s representatives. The government delegation skipped an initial meeting on Tuesday citing confusion over the militants’ team after two members pulled out.

Professor Ibrahim Khan, another member of the Taliban peace committee, said they had yet to hold talks with the militants to discuss the next step.

Prime Minister Nawaz Sharif surprised many last week when he announced he wanted to give peace talks another chance. The start of the year has seen a surge in militant violence with more than 110 people killed, and an Air Force bombardment of TTP hideouts in North Waziristan led many to suppose a major military offensive was imminent.

The start of dialogue efforts has not brought an end to the violence. Just hours after Tuesday’s abortive first attempt, eight people were killed in a suicide attack in Peshawar. No members of the TTP or government are on either negotiating team and analyst and author Imtiaz Gul said this made meaningful talks almost impossible.

“From the very beginning, it looked like an arduous process because of the lack of real TTP representation,” he said. “If Aziz has spoken on behalf of the TTP then this means the process will possibly lead to nowhere.”

Critics of the talks have warned Sharif’s democratically elected government risks ceding ground to the militants. “Aziz wants to dictate the new constitutional parameters of Pakistan through his interpretation of religion,” said retired general Talat Masood, a security analyst.

Thursday’s joint statement said the scope of the talks would be confined to areas affected by violence and not extend to the whole country, but Masood warned the TTP would seek to extend their sphere. “They want to retain their present hold on the territory that they have and want to continue expanding their influence in the country,” he said.

In the past, peace deals reached with the TTP have quickly fallen apart, with the militants using the cessation of hostilities as an opportunity to regroup and re-arm.