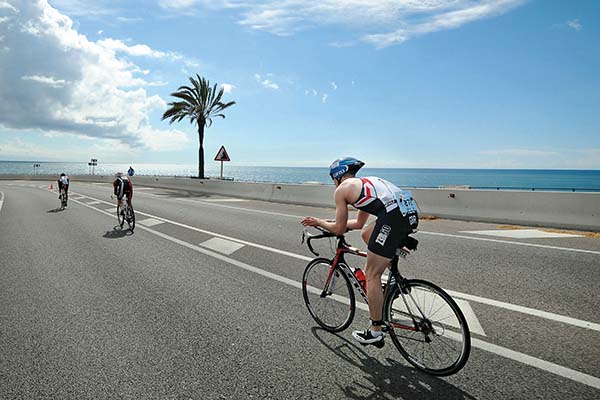 The Kent Avenue Speedway is a one-mile-long straightaway that cuts through a bustling waterfront neighborhood in Williamsburg, Brooklyn, in an area where luxurious glass condominiums grow up between crumbling brick warehouses on the banks of the East River.

It’s a racetrack. Or, rather, a “racetrack”—in reality just a stretch of bike lane some tech-savvy cyclist decided to turn into a competitive space. So he marked it on Strava, a premiere cycling app that uses GPS to let cyclists track their rides, record their best times, and share the news with friends and competitors. The starting gate sits where Franklin Avenue meets Kent, the finish line near the base of the Williamsburg Bridge. To date, 1,568 different cyclists have competed on the raceway a total of 4,710 times, all tracking their performances using Strava.

At a casual pedaling pace, it takes me around four and a half minutes to get from the starting point to the finish. It took a cyclist named Pete just two minutes and 15 seconds back in March of last year. He is the KOM—the king of the mountain, a title taken from the Tour de France for the rider with the fastest time per segment—and a cyclist named Kristie is his queen. Both are local Strava celebrities, with hundreds hot on their tail.

Both Strava and competitor RunKeeper—which boasts a global community of more than 20 million cyclists, runners, and other athletes—have found unique ways to turn the phone into a mobile personal trainer, and are actively rolling out updates in time for the sporting season. In June, Strava athletes will be able to see their results in the app in real time, so they can see how they’re stacking up against that day’s competition as they go. RunKeeper, meanwhile, is on a roll, extending the app’s experience to a variety of additional apps and devices—like the Pebble smartwatch—so you can keep track of stats like your average pace as you ride. The aim, a spokesperson for the company tells Newsweek, is to “improve RunKeeper’s guidance and social experience so we become a more and more effective fitness coach.”

Both of these apps are betting that when everyone’s watching you ride, chances are you’ll pedal faster.